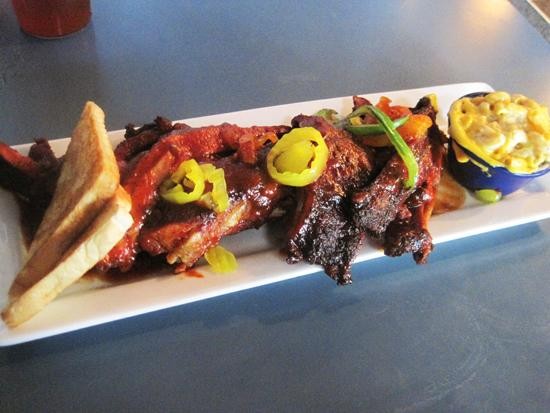 This summer, Sir's Bar-B-Que (6714 Olive Boulevard, University City; 314-727-1474) opened its third location in as many years, following the original on Delmar Boulevard east of the Loop and its successor on Pine Street downtown.

Here's hoping the new location, near the corner of Olive Boulevard and Kingsland Avenue in University City, sticks as well as the sauce that coats its ribs.

Sir's smokes its ribs over apple and oak wood, with a little birch added to stoke the heat. The scent of woodsmoke lingers on your hands for several hours after your meal. The flavor reveals itself slowly.

First, you taste the sauce in which the ribs are slathered, a thick, brick-red concoction with a definite tang and a gradual, back-of-the-mouth heat. It isn't sweet -- or, at least, isn't too sweet. Calling anything else sweet after a sip of Sir's sweet tea is impossible. Would I prefer the sauce served on the side? Yes, but as far as barbecue sauces go, Sir's is a good one.

Go for the plumpest rib bones first. The meat is tender, and the sauce slicking that perfect marriage of pig and smoke. A few of the smaller bones weren't as tender, the meat even tough near the tapered ends.

A half-slab of ribs costs $13.95, which includes one side of your choice. I went for the mac & cheese, which is thick and creamy, with that generic cheese tang that millions of American kids love. The serving is small, but given the amount of barbecue on your plate, you won't mind or likely even notice.