This is part one of Emily Wasserman's Chef's Choice profile of Steve Komorek of Trattoria Marcella. Part two, a Q&A, will be posted tomorrow, and part three, a recipe from Komorek, will be posted on Thursday.

Walking up to Trattoria Marcella (3600 Watson Road; 314-352-7706) at 1 p.m. on a Saturday afternoon is a little like passing through a ghost town. The restaurant seems dark and abandoned, and by pressing your face up against the window, you can see a small sliver of light coming from the kitchen. Considering the fact that the trattoria is only open for dinner, it wasn't so unusual not to see customers or servers. But for a second we worried. Where was Steve Komorek? Would the chef and co-owner of Trattoria Marcella magically appear, or would we be left pondering the secrets to his restaurant's success?

But then Komorek strides out of the kitchen, bursting with energy and enthusiasm. He shows us into the dining room, where a black-and-white photo of his mother (also the restaurant's namesake) hangs mounted on the wall, surrounded by flowers and bottles of Italian wine. As we sit down at a table by the window, Komorek casually pushes aside silverware and napkins. It's as if he is sitting down at his own dining-room table, and perhaps, in a way, he is. Trattoria Marcella is clearly a family affair, and its roots date back generations.

"Restaurants are in my family's blood. My mother's parents were in the restaurant business and first opened Slay's Restaurant in 1911. We all grew up working in the restaurant, and I developed a sophisticated palate," Komorek smiles. "We would live on leftovers and restaurant food. I grew up eating shrimp cocktails and salads with blue cheese."

Komorek's sophisticated palate also included Lebanese cuisine, as his father was of Lebanese descent. With a variety of culinary experiences and a family in the restaurant business, Komorek found his calling at young age.

"In my eighth-grade yearbook we had to list a 'serious future occupation.' I put 'restaurateur.'"

Komorek knew he wanted to be a chef and restaurant owner, but he wasn't as certain about his educational aspirations. He struggled in high school, finding it hard to focus on his studies when he had other, bigger ambitions.

"One of my high school teachers at CBC was giving a lecture and saw that I wasn't paying attention. He walked up and asked what I was doing. I was making a business plan for a pizzeria," Komorek says.

After a brief stint in college, Komorek realized that his true passion lay in the kitchen, not the classroom. He started his career in St. Louis but then moved to Las Vegas to work in restaurants such as Savoia and Pamplemousse, a classic French establishment known for its romantic ambience and affordable gourmet cuisine.

During this time Komorek also went to work for his cousin, David Slay, in California. Slay, who started running his own kitchens and restaurants at the age of seventeen, helped Komorek gain valuable culinary and business experience.

In the early 1990s, Komorek finally decided to come back to his hometown. On the long car ride back from the West Coast, the idea for Trattoria Marcella was born. 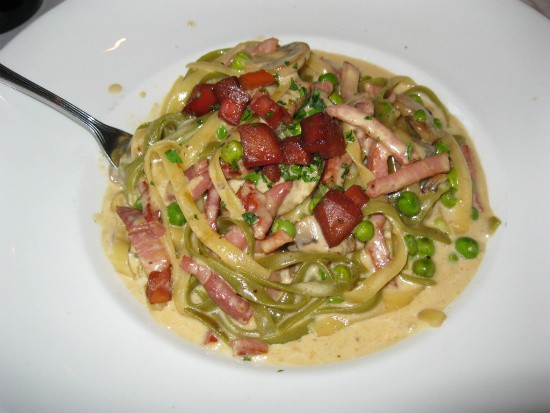 "My brother helped me drive back to St. Louis, and as we were crossing the Hoover Dam, I started to write a business plan: a restaurant with a fusion of Italian and Asian food. I went from that back to a Mediterranean concept. Then I thought of an old-school Italian restaurant with red-checkered tablecloths," he says.

Komorek's plan of opening a traditional Italian establishment didn't quite come to fruition. He had trouble securing a location on the Hill. For a while, Komorek and his brother weren't sure where they were going to open their restaurant. But then Watson Chinese closed, and Komorek bought the restaurant space for a mere $5,000.

Since its opening in 1995, Trattoria Marcella has undergone two expansions and frequent renovations. During the interview, Komorek leads us over to a wooden wall at the side of the restaurant, looks at it proudly and tells us that he built it himself.

"I'm hands-on. I like working with my hands, and this also applies to my work in the kitchen. I create dishes and have the gratification of hearing, 'Wow, that's great,' from the customers," Komorek says.

Komorek is anything but a spectator, and so it's easy to understand why he didn't thrive in a more restrictive classroom setting. However, when Komorek was invited to pursue a master's diploma in Tuscany seven years ago, he heartily accepted. As one of only ten students, Komorek studied Italian cooking through Carlo Petrini's Slow Food program. Petrini, a native Italian and chef, began the Slow Food movement in 1986 as a counter-revolution to fast food. "When McDonald's opened by the Spanish Steps, Petrini was scared we'd all be eating Big Macs," Komorek says.

During his time in the Slow Food program, Komorek gained a greater appreciation for fresh, local cuisine and also deepened his knowledge of food in general. Komorek discovered ingredients ranging from wild chickpeas to guanciale, the "king" of prosciutto ham. "Italy was like a 101 course for me," Komorek says. He arrived back in the United States eager to incorporate his new findings into the restaurant's menu but realized a difficult truth of the business.

"I was very excited about showing people what I saw and learned, but then I realized that too much change was overwhelming. People like familiar. They want to be able to identify what they eat. I learned how to work the ingredients in. Now people recognize a dish we started three or four years ago," Komorek says.

Both customers and critics recognize Komorek's cooking: Over the years his restaurant has garnered a Zagat rating and multiple awards recognizing it as among the best Italian restaurants in St. Louis. After watching the restaurant flourish throughout the last fifteen years, Komorek is ready to pursue larger goals.

"I'm excited about continuing what we do here, and helping the staff grow with us. But we're trying to find new opportunities -- whether it's a pizza place or another Trattoria location. I'm at a point where Trattoria Marcella is running great, the economy is a little better, I have a great staff, and I'm ready to take on something different," Komorek says.

Even though Komorek was once a reluctant student, he still stresses education as the most important factor in determining future success. He reads "no less than five hours a week," and researches recipes and ingredients to inspire his own menu creations. His best advice for aspiring chefs is to combine industry experience with a solid education, gaining the best of both worlds.

"In today's world, so many young chefs watch TV and want to be Mario Batali or Emeril. But five years later you're out of a job. The young chefs don't realize that it's a lot of hard work. If you're young and figuring out what you want to do, it doesn't hurt to get a degree while working. You've got a long time ahead of you, and it's good to have something to fall back on."