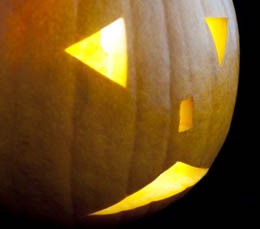 This summer's freaky weather -- floods to droughts and the scorching heat -- has done a number on the local pumpkin harvest.

Last night FOX 2 reported that the St. Louis area's pumpkin crops are smaller this year, both in crop and fruit size. Harvest times are running late because the excessive rains last spring prevented farmers from planting their pumpkins on time.

See? No problem. We can ship pumpkins in from elsewhere.

Except the Northeast is experiencing an even bigger pumpkin shortage, thanks to Hurricane Irene.

While Midwest pumpkins are delayed, many Northeast pumpkin patches were destroyed by the rains that followed the hurricane. One farmer told the Washington Post about watching the storm dump his entire crop -- 15,000 to 20,000 pumpkins -- into Lake Champlain.

Prior to the hurricane, many pumpkin farmers faced the same delayed planting as the ones in the Midwest. They also had an outbreak of phytophthora fungus before the storms and are now facing potential crop loss to an upcoming cold spell later this week.

The pumpkin shortage will mainly affect pick-your-own and jack-o'-lantern sales, although it could make supplies scarce for people who want to can or freeze local pumpkin.

Commercial canned pumpkin shouldn't be affected much, unlike the pumpkin shortage in 2009. Heavy rains in Morton, Illinois, where Libby's grows most of its pumpkins, ruined crops and created a holiday shortage. Cans of Libby's pumpkin were sold on eBay for upward of $7. In August Libby's, which produces 85 percent of the canned pumpkin sold in the United States, issued a press release saying its crops are just fine.

Media News of the World