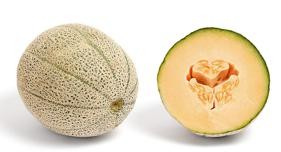 Update: (Thursday, September 15, 4:05 p.m.) A voluntary recall of Rocky Ford cantaloupes has been issued by Jensen Farms in Colorado because of a possible listeria contamination. The recall includes cantaloupes shipped to seventeen states, including Missouri and Illinois. For more information on the recall, call 1-800-267-4561 or e-mail Rocky Ford at recall@rfordcantaloupe.com

Cantaloupe recalls aren't uncommon. Back in June, Kandy recalled 1,760 cartons of cantaloupes shipped to New York and Pennsylvania. After a similar recall in March, we reported that cantaloupes are often contaminated after exposure to animal feces. Since the rinds are inedible, they aren't washed in the packing process.

Food Safety News recommends placing purchased cantaloupes in plastic bags at the store. Once home, wash the melon with warm water and a stiff-bristled brush. You can also soak it in diluted bleach water (seven drops of bleach per gallon of water) or use a commercial vegetable wash. Refrigerate the melon, then decontaminate your entire house as you would if you'd experienced a diseased chicken explosion.

Rocky Ford cantaloupes are an American original. The super sweet melons borne from the sandy soil of the southeastern Colorado desert can be up to 17 percent sugar. They've been a coveted late-summer treat for over a century.

But this year, they're making people sick with listeria.

Four deaths in New Mexico have been linked to the tainted cantaloupes. Sixteen other people in Colorado, Nebraska, Indiana, Oklahoma and Texas have become ill from the melons.

When buying cantaloupes, check the sticker on the fruit. It will indicate if the melon originated in the Rocky Ford region. Because there hasn't been an official FDA recall of the melons, the Centers for Disease Control and Prevention is advising consumers to dispose of any Rocky Ford Melons they may have purchased.