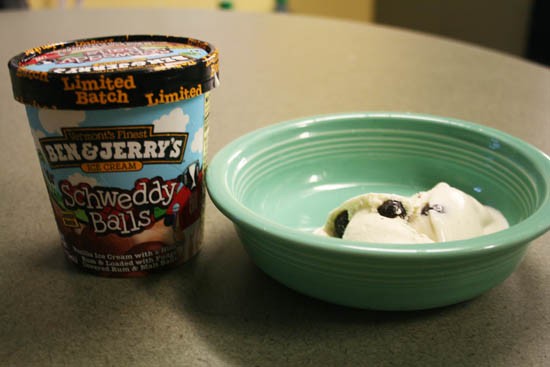 As reported yesterday, Gut Check's been on a quest for Schweddy Balls. After hours of phone calls met with laughter, disbelief and rejection after rejection, the Town & Country Whole Foods (1160 Town and Country Crossing Road, Town & Country; 636-527-1160) came through, with a pair of Schweddy Balls pints still in stock. They were kind enough to hold them for us, so we ventured out to T&C for some B&J.

On the rainy 25-minute drive back to the office, we nearly died of anticipation while the pint schweated in the passenger seat. By the time we reached our destination and got to scooping, the situation had gotten slightly soupy. Popping the pint in the freezer for about fifteen minutes would have been the logical thing to do. However, we didn't wait a week, call everyone and their mom, drive across town and get rain-drenched to sit with the elusive treat just within our grasp and wait to eat it. So, we dug in.

We kicked things off with a ball-free bite. The rum and vanilla ice cream is delectable -- not overwhelmingly rich, but substantial enough to enjoy by itself (read: not packed with balls). Because there are two different types of Schweddy balls, identical in appearance, you never know what you'll get when you bust into each one. It could be filled with sweet, creamy rum, or it could be a crunchy malt ball; either way, the flavor mixes wonderfully with the rum-vanilla ice-cream base.

What began as a (fantastic!) gimmick has become an awesome (but, alas, limited-edition) flavor. Perhaps Ben & Jerry's will embrace the kitsch further, allowing Schweddy Balls to remain atop our freezer shelves beside classics like Cherry Garcia, Chubby Hubby and Half Baked. Of course, this is kind of like worrying about a breakup before a first date. Most of St. Louis hasn't even had an opportunity to taste Ben & Jerry's Schweddy Balls yet.

Ben & Jerry's (6380 Delmar Boulevard, University City; 314-721-8887) in the Delmar Loop will have three tubs and eight prepacked pints of the flavor in stock this weekend. They can't commit to a precise time yet, but the scoop shop promises to put its Schweddy Balls in your mouth by end of business Saturday, and the Ben & Jerry's cow will be at the location to watch. You know, if you're into that kind of thing.