We Can't Wait to Get Our Mouth Around Some Schweddy Balls 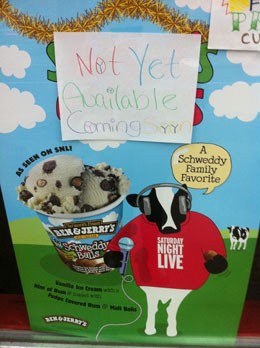 As the photo shows, the Delmar Loop B&J hasn't gotten a shipment of the flavor, which consists of vanilla ice cream with a hint of rum and chocolate-covered rum and malt balls. But both the Loop and Galleria locations assure us Schweddy Balls will roll in soon.

Dierbergs isn't carrying it yet, and the woman on the phone didn't even laugh at us for asking.

Schnucks has no Schweddy Balls, but the manager of the Richmond Center location, Jerry Lueders, encouraged us to request it through the store's website. He also encouraged us to note that we are, in fact, not joking. Although he stays on top of food news and knew what we were looking for, he was afraid that some might think we were pulling their leg.

Shop 'n Save isn't carrying the flavor either, but we're still glad we asked. An employee at the Maplewood location giggled for a full minute before checking the store's stock. It made us laugh, too. We had a moment, us and that guy.

Target also doesn't have the flavor, and in asking, we were transferred about six times and hung up on once. That's OK, though. What they lack in balls, they make up for in Missoni.

After being shot down at the Brentwood Whole Foods, we finally found Schweddy salvation at the Town & Country location. Yes, this gentleman also laughed at us, but he pulled himself together for long enough to confirm that yes, he does in fact have the flavor in stock, and there are exactly two pints left. One of those pints belongs to us, but the other, dear reader, is up for grabs. Schweddy Balls are elusive, and if you're not careful, they could slip right through your fingers. Get 'em while you can.

For the rest of you, check back tomorrow for our first look at Schweddy Balls. In the meantime, re-watch the video below and bask in the hilarious adolescent punnery. There's more where that came from.

Have you seen Schweddy Balls? E-mail us if we missed a shop that's carrying the flavor.