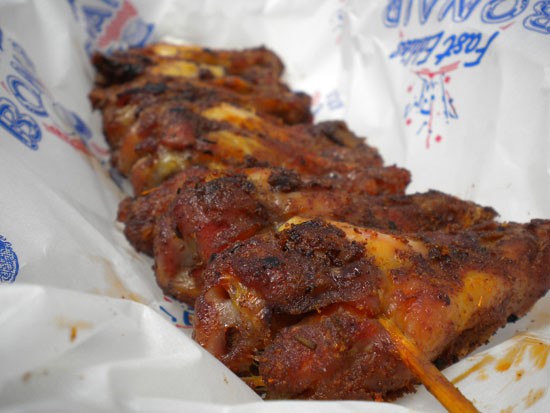 Ghost tours in Alton, Illinois, feature Confederate prisoners of war, slaves fleeing on the Underground Railroad and the occasional juicy murderous love triangle or suicide. Surely the tour guide should mention the mystery of the maimed, wingless chickens.

Order the Hot Chick On-a Stick at Fast Eddie's Bon Air (1530 East Fourth Street, Alton, Illinois; 618-462-5532), and ten skewered chicken wing pieces show up in a paper basket. Poultry appears nowhere else on the limited menu. Where do the rest of the chickens go?

Of course, Fast Eddie's probably orders wings by the case from its supplier, but the other mystery of Fast Eddie's is how it keeps its prices so low. At $2.99, the Hot Chick On-a Stick ties with the Big Elwood on a Stick (marinated tenderloin and bell peppers) for the most expensive menu item at Fast Eddie's. Prices haven't changed in decades.

This particular feat isn't a mystery, either. At Fast Eddie's you work for that bargain-basement grub. Stand in line for your food, grab your own napkins, seat yourself, and wait for what seems like an eon listening for your number, then trek back to the grill to pick up your order. Patrons must buy a drink to make up for low food costs, and numerous signs warn cheapskates that carry-outs are prohibited.

Because the wings are cheap and you're burning all those calories working for them, you might as well make it a double or triple order. It helps that the Hot Chick On-a Stick is delicious. The wings, dainty even by chicken-wing standards, feature a dry rub. And because the bird bits are so tightly skewered, they retain their moisture, causing the yellow rub to blend with the chicken juices and creating a succulent, charred mess all over your fingers.

In case you neglected to get enough napkins the first time, on your return to the dispenser you can check out another one of the true oddities of Alton: the shoe of Robert Wadlow, once the world's tallest man. His size 25 lace-ups remain a tangible reminder of Alton's eccentricities.