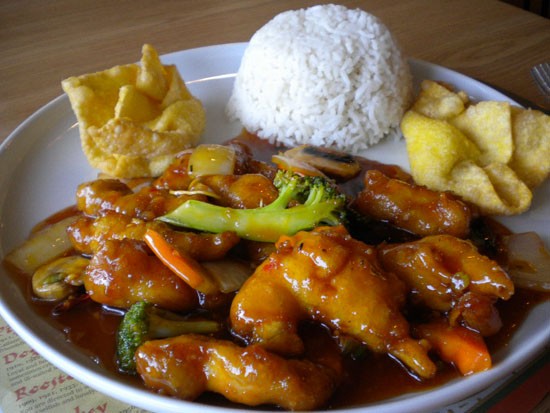 The Lunch: House Hot Braised Chicken with Vegetables served with rice, crab rangoon and choice of soup for $6.39.

The Verdict: The lunch menu at Steak & Rice contains nearly sixty options, all priced under $7.00. Although Gut Check pigs out for a living, on this particular luncheon outing, we were feeling a little calorie conscious. We skipped over the deep fried and sweet and sour options before spotting the House Hot Braised Chicken.

We virtuously opted for steamed instead of fried rice and abstained from adding an egg roll for only 95 cents more. Braising, a slow cooking method involving moisture to tenderize the meat, sounded much healthier than chicken dipped in the fryer.

While we waited for the entrée, we downed a bowl of egg drop soup. The soup had a deep, almost yolk-colored yellow hue and contained, surprisingly, several spoonsful of corn kernels. Although their presence surprised, the taste of the corn added a delicate flavor to the soup.

Alas, our attempts at virtue came to naught. The Hot Braised Chicken was battered and deep fried. Deep fried, but delicious. It was all white meat, at least, with plenty of vegetables. The slices of mushroom, onion, broccoli and carrot were nearly raw, with just enough cooking to warm and soften them but not so much as to lose texture.

A small pepper icon on the menu warns diners that the braised chicken is a spicy dish, but the heat tingled rather than burned.

With specials running from 11 a.m. until 3 p.m., and nearly sixty line items for lunch, Steak & Rice is convenient and affordable. The plastic-covered menu offered tableside has some substantial differences, however, from the to-go menu. The latter advertises that the restaurant uses "low salt" and "100% pure vegetable oil." It also contains a section entitled "Weight Watcher Special" with eight steamed dishes cooked without salt, oil, MSG or corn starch.

For virtuous dining, be sure to ask for the to-go menu tableside.