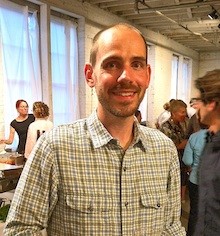 This past Saturday, hungry St. Louisans gathered at the Koken Art Factory (2500 Ohio Avenue, Soulard/Benton Park; 314-776-7600) to sample and celebrate some of our city's best slow food. The event, Art of Food, was organized by Slow Food St. Louis. According to Bill Burge, co-leader of the organization, the event was designed to showcase not just "the food and who grows it, but also who comes up with ideas and cooks it and feeds other people."

Participating chefs included such headliners as Kevin Nashan of Sidney Street Café, Kevin Willmann of Farmhaus, Nick Miller of Harvest and also artisans Tyler Zimmer and Frank McGinty of Kaldi's and Josh Allen of Companion. Burge emphasized that the presence of Kaldi's and Companion were especially important. "They're artisanal, and that's another aspect of slow food: that someone's trying to do something the right way, and trying to raise the bar for what that thing can be."

The evening featured not only small plate samplings from twenty chefs, but also a silent auction, all of the proceeds of which benefited Slow Food St. Louis. Eventgoers could bid on a variety of ceramics and prints, but also gift card baskets and unique opportunities, like the chance to be a chocolatier for a day with Brian Pelletier at Kakao.

By all accounts, it was a great success: there were more chefs and attendees than ever (this was the sixth year), and interest in the auction was high. For chefs, it was a rare opportunity to get together in one space, share in some friendly banter and take a peek at what their peers were up to. Chef Clara Moore of Local Harvest Café and Catering shared her thoughts: "This is my fourth year here, and it's a lot of fun for me. I look forward to this event the most. In fact, Bill Burge was one of the first people to make me feel like a legitimate chef, and it was because of his invitation to this event that I got my first chance to be on the same stage as the big dogs--guys like Gerard [Craft] and Kevin [Nashan]."

If you missed Art of Food this year, we're sorry to hear that, but there are lots of ways to get involved and see what Slow Food is doing until Art of Food 2012 rolls around. Kelly Childs, co-leader, is also very involved in community outreach efforts: "We distribute a lot of literature, and provide assistance in creating school gardens. We've been contacted by schools as far away as Washington, Missouri."

No matter what your stance on food politics, the optimism, ambition and spirit of celebration of Art of Food was clear. For Bill Burge, it was a night to recognize what farmers, vendors and chefs in St. Louis have accomplished, but also to remind ourselves that there's always room for improvement: "I want everybody to be constantly shooting for something higher, not to become passive about wherever we're at."