Welcome to Spice World, in which Gut Check looks at overlooked spices from around the globe, introducing those you probably don't own -- and probably should.

History: As summer begins its nosedive into fall, with it go certain plants we won't think of again till springtime, like the itchy trio of poisons oak, ivy and sumac. But as a spice, ground sumac berries -- a cousin of the itchy stuff we know stateside -- is not just ingestible, but indispensable in Lebanese and North African cuisines, where they impart a bright, tart taste.

Today: Sumac bushes are grown in the Mediterranean and the Mideast, and the berries vary in color from deep red to purple, depending on where they're grown. It plays a role in many popular dishes there: If you're familiar with the spice blend za'atar, you're familiar with sumac, its chief component. The spread -- which also often features oregano, marjoram and sesame seeds -- is commonly spread on pita, and sumac is sometimes blended into a drink to ease upset stomachs.

In Use: Sumac paired with the spinach, feta and onion in these Middle Eastern savory tarts like a dream, lending a sour tang which, along with the lemon juice, lifted the two-bite tarts into an appetizer that was at once familiar and vaguely exotic. The dough was a pain to work with, so instead sprinkle sumac upon store-bought hummus, and act nonchalant when people ask what the reddish lemony stuff is on top. 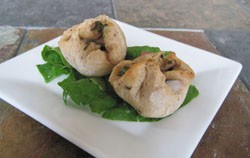 What overlooked spices heat up your kitchen? E-mail Gut Check your tips!