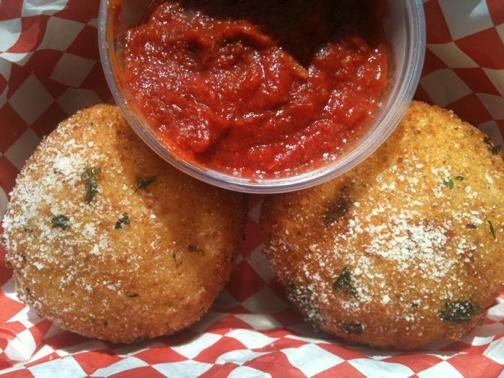 What's in a name? If you're food truck Mangia Mobile, a lawsuit from a similarly named local restaurant.

Mangia Mobile compensates for the name overlap by bringing Italian street food to St. Louis. Specifically, Sicilian-style arancini. Owners Catherine, Thomas and Alex Daake borrowed the recipe from their Sicilian grandmother and no one minds.

How could we, when arancini are concerned? Somewhere between the size of a golf and a tennis ball, the Daakes layer beef, mozzerella and rice, toss the concoction in seasoned breadcrumbs and deep-fry to order. Served with a side of homemade marinara sauce for drizzling -- the arancini are too big to dip -- they're fresh, hot, crisp and hearty. The rice stays toothsome and a little chewy, reminiscent of risotto. At its core the meat and cheese melt together, mild in flavor, allowing the bright freshness of the marinara to shine.

Not every great meal needs to be served in a darkened cafe. Mangia Mobile's arancini prove that sometimes, a great dish can come from a truck and be savored while hustling down Market Street. An arancini sold by another name would taste just as wonderful.