A First Look at Lester's in the Central West End

Nevermind that it took six months of fighting with the city, putting in new dry wall, moving the front door, adding a side extension, expanding the kitchen, redoing the basement and finishing a staircase. As Ian reported yesterday, Lester's Sports Bar and Grill has finally opened its doors.

It took a year and a half to finish everything, which makes perfect sense listening to co-owner Pedro Beltranena run through the litany of construction projects and red tape that had to be dealt with.

This is the third location for Lester's, and it's a step up from its sister restaurants in Chesterfield and Ladue. There are 37 TVs, all of which are controlled by a mega-computer that sits in a locked box in the basement. But these TVs won't just get turned on for Monday Night Football fans, Beltranena had them all hooked up to play slideshows, PowerPoint presentations, home videos -- pretty much anything desired for birthdays, retirement parties, baby showers or corporate events.

This technological advance clearly got Beltranena excited. He raced through explanations on how it all works, the setup and its capabilities, but he quickly returns to his main point. Lester's is a restaurant first.

And this is no run-of-the-mill sports bar. Yes there are paper napkins, but the silver is polished. The chairs, with their leather backs, are pushed in; the tables are clean. And the food? Suffice it to say there are no boil bags here. 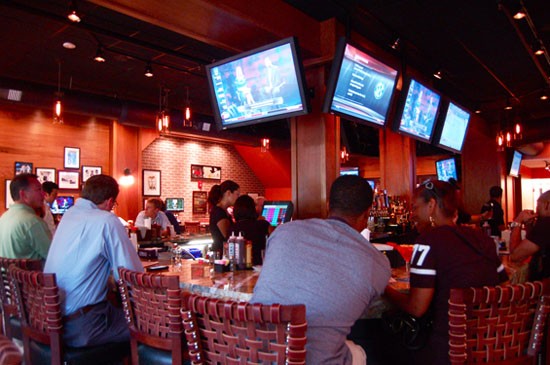 Beltranena walked Gut Check through the remodeled kitchen to show off the racks of turkey legs and ribs that would be smoked in house. Everything here is sliced to order. Vats of homemade dressing, fresh salsa and guacamole are stored in a giant walk-in cooler. At the soft opening Wednesday night, the kitchen was ready to get cooking.

But it took a lot of work to get to this point. Beltranena led us down into the basement to show us where there had once been a small river running through the building. "We re-did the whole basement," he explains. "It was scary. Like, maybe a few bodies buried down here, it was so scary."

It wasn't just the creepy basement that nearly scared Lester's away from the Central West End. Beltranena and his co-owner and brainchild of the restaurant, Lester Miller, spent months working with the West End Committee and the city of St. Louis to get their remodeling plans approved. After all, they were wanting to break brick on a building that was built in the late 1800s.

"At every turn it seemed the city would say no," Beltranena said. But now everything is in place. The front door was moved to the right to make way for a giant wrap-around bar. The tables and chairs have been assembled, the chandelier-like lighting is in place, the TVs are bolted in and turned on, and the rooftop bar and patio is set to open in one week.

It might have taken a solid year (one that, according to Beltranena, turned his hair gray), but it looks great. And oddly enough, after all the headaches, Miller and Beltranena are already looking to open a fourth location.