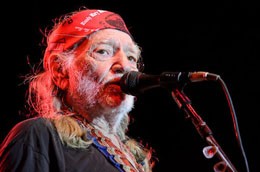 Willie Nelson has been a proponent of family farms for years; he co-founded Farm Aid 26 years ago. And Chipotle has built its reputation on supporting sustainable farming. Makes sense that they would team up.

Willie's recorded a cover of Coldplay's "The Scientist" and is donating sixty cents from each iTunes sale to the newly announced Chipotle Cultivate Foundation.

In a press release from August 25, Chipotle founder and co-C.E.O. Steve Ells explained the foundation:

For more than a decade, we have been working to improve the nation's food supply by finding more sustainable sources for all of the ingredients we use in our restaurants. By creating the Chipotle Cultivate Foundation, we are extending our reach beyond our restaurants and will be supporting organizations and people that are working to improve individual family farms, animals and the environment, and youth and education programs.

Here's Willie's contribution to the cause.

Gut Check had some questions about the pairing, which were fielded by Chipotle rep Kathelin Buxton.

Gut Check: How did Willie Nelson get involved?

Kathelin Buxton: It made sense to partner with Willie Nelson on this project as Willie Nelson shares Chipotle's commitment to supporting family farming. Chipotle has worked with Farm Aid, so this is a natural way to expand their partnership with the hope that by working together they can help people understand the importance of food that is raised right.

Where will the video be seen, besides online?

Chipotle plans to show the two-minute film nationally beginning in September, including on nearly 5,700 movie-theater screens in advance of feature films.

Are the funds from the song's sales going to any particular beneficiary of the foundation?

While no specific beneficiary has been named for this initiative, Chipotle has a history of supporting causes to improve the way people eat. Over the last two years the company has donated more than $2 million to philanthropic organizations, with much of that benefitting groups that are working to improve some element of the food system, including Jamie Oliver's Food Revolution, the Nature Conservancy, FamilyFarmed.org, the Lunch Box, and the Niman Ranch Scholarship Fund, among many others. Announcement of specific beneficiaries will be announced as agreements are finalized.