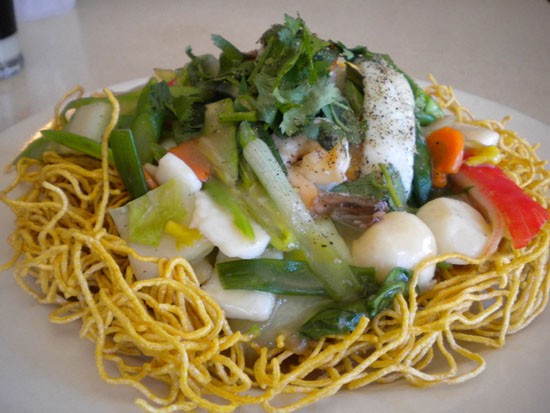 When the dish arrives tableside, a mountain of seafood and vegetables perches on a platter-size disc of golden, crispy noodles. At the edges of the plate, the thin noodles shatter into crisp shards. Meanwhile, underneath the heaping mound of shrimp, fish balls, squid, imitation crab and vegetables, the thick sauce is softening the center noodles back into flexible pasta.

Midway through the meal, individual strands of noodle start crunchy and then soften, until they whip the gravy-like sauce onto your chin. The next day -- the menu states that the dish serves two, so leftovers are a given -- the vegetables and noodles taste and feel like a more typical, albeit delicious, Vietnamese noodle dish.

Through some kind of sorcery, Pho Grand manages to make a single dish for two feel like a culinary cornucopia.