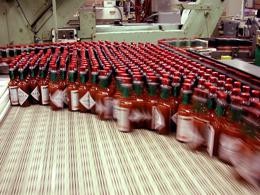 Since bidding farewell to Oprah in May, her protegee, Dr. Phil, has wasted no time in claiming the title of hosting America's No. 1 talk show. At least, according to the advertisements for his daytime talk show.

It's no wonder people are tuning in, what with the recent spectacle of the Hot Sauce Mom. A mother in Alaska, who appeared on The Dr. Phil Show last winter because she punishes her son with hot sauce, was convicted of child abuse on Tuesday based on the Dr. Phil footage.

Oprah had some great food moments. With the Hot Sauce Mom leading the way in Phil's Freak Parade, we have our doubts that his show is going to continue Oprah's gourmand tradition.

He's got a sassy lady who's nicknamed her sister after cheap snack cakes and advises her to get her jaw wired shut.

And kids who have to steal food because their druggie, neglectful mother doesn't provide in a delicious-sounding episode titled, "Maggots, Mold and Rotten Milk."

Because we just can't get enough of those Freaky Eaters on TLC, Dr. Phil gives them another media outlet.

Iron Chef Cat Cora giving advice on how to catch a man with dinner. Dr. Phil has 80 pounds of chicken fat that equals your lardy kid, and it's all your fault.

17 Day Diet! That's all it takes to lose those unwanted pounds!

Even if you've gone "from Barbie to unbearable!"

It's a perfect diet with no decision-making about what you eat!

Oh Oprah. What have you left us with?