Another Day, Another Burger at Christy's Hamburgers 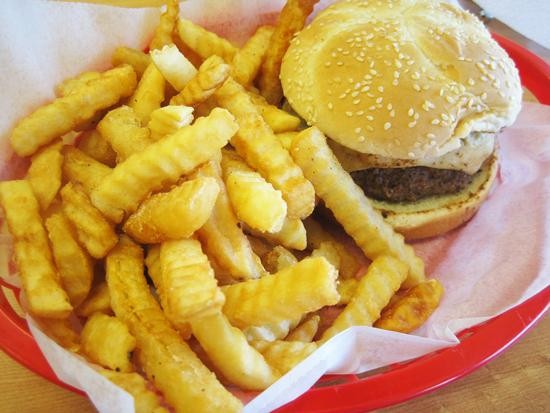 Christy's is a no-frills fast-casual burgers joint. The space has as much charm as a high-school cafeteria. The "fabulous" fixings bar contains several unlabeled sauces, some obvious (mustard, barbecue), some not (is that bleu cheese? or chunky ranch?).

Of course, a good burger can transcend all this.

The Verdict: I ordered the "Big Christy," a half-pound burger. There is also the "Christy" (one-third of a pound), the "Double Christy" (one pound) and the "Triple Christy" (a pound and a half). You can top this with cheese, bacon, mushrooms and/or grilled onions as well as the standard assortment of toppings and condiments from the aforementioned fixings bar. I kept mine simple, with only cheese.

The burger is very thick -- probably two inches at its thickest point. You can't specify a cooking temperature, but while my burger was close to well done, it still had a little pink here and there, and the meat was juicy.

(The fries are crinkle-cut and, while a touch bland in flavor, nicely crisped.)

The flavor was straightforward, the ground beef simply seasoned. A perfectly adequate burger, given the price point, if not especially distinctive in the ever more crowded field of burger and "better burger" joints.