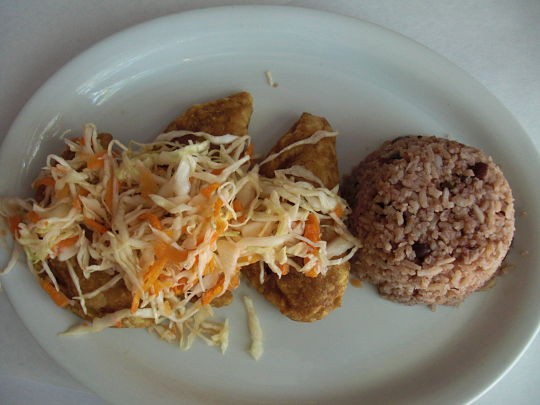 Fritanga (2208 South Jefferson Avenue; 314-664-7777) serves what is easily the most earnest Nicaraguan food in St. Louis. Sure, it's also the only Nicaraguan food in St. Louis, but we're convinced that statement would still be the truth even if the niche were generously exploited. Located in a colorful but unassuming storefront about a block and a half from the heavy-rotation McDonalds on Jefferson, the south-city restaurant is as unassuming as it is covered in evidence of its ties to Central and South America. Flags from three countries cover the walls while the menu itself is decorated in a blunt assortment of photos: plantains, the shoreline, a postcard that says only "NICARAGUA." It's an easy place to like.

That said, ignore all the signs. Fritanga welcomes casual or curious newcomers but doesn't cater to them, and it's not unusual to hear three languages inside the restaurant at once. (The owner doesn't order Dr Pepper or root beer because he just "doesn't like them.") Here, where the menu is as diverse as the wall adornments, meat dishes are king but can usually still be adapted to vegetarian needs. This is key to the pastelitos, crisp and chubby empanadas that can be filled with chicken, ground beef, zucchini or cheese (or, if you ask nicely, a combination of the last two).

If you can make it out at lunch, the restaurant reaches its peak during a steady but sluggish stream of mid-day regulars who often order off-menu and are unafraid to direct your ordering, too. In the meantime, we strongly suggest the pastelitos. Lunch entrees are served with gallo pinto (rice and beans) and repollo salad (the equivalent of cole slaw), which offset the pastry nature of the pastelitos: basically healthier, more well-rounded turnovers of smaller proportions. Although the empanadas are small, they should not be underestimated: Each one packs at least four bites of the stuffing you desire, and the addition of cole slaw guarantees a subtle hint of sour with your savory.