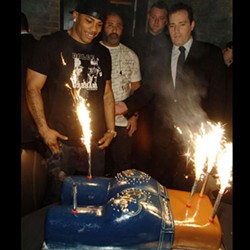 One of the weirdest stories that Gut Check has followed over the past few years has apparently reached its end, reports the St. Louis Business Journal: Skybox, the sports bar and restaurant that Nelly, Marshall Faulk, Darius Miles and Larry Hughes opened at 800 North Third Street, will become the Vatterott College Ex'treme [sic] Institute, a music-recording school.

Skybox opened in early 2008. In 2009, the restaurant changed its name to The Levee, though only briefly. Around the same time, something called King Louie's Courtyard Bar & Pizzeria also opened -- and then closed. There might have also been something called North 40 there?

(And, of course, before Nelly et. al. took over the address, it was home to Planet Hollywood.)