You might have sampled Nutella on a crepe, which is standard fare in France. The creamy chocolate-hazelnut spread melts on a hot, buttery crepe shell, and the combination is nothing less than divine.

However, France's neighbor to the north boasts its own sweet spread. The Belgians have always been famous for their waffles and cookies, but now they've created a real tour de force: Speculoos Spread. Speculoos, or "Biscoff" spread as its known in North America, is a thick, creamy confection with the consistency of peanut butter. To the naked eye, it even looks like peanut butter: the same brown color, many shades lighter than Nutella. If you've ever flown Delta, you might have been served the cookie version of the spread (albeit in shiny plastic Delta wrappers). Both the spread and the cookie taste like gingerbread, with a warm cinnamon aftertaste.

It's hard to put to equally delicious contenders up for the prize of Best European spread. Some might say it's like comparing apples and oranges: Nutella has a strong chocolate-hazelnut taste, and Biscoff tastes more like peanut butter, just with a little more cinnamon. Gut Check had a hard time finding Biscoff, but when Straub's ran an ad for it in the paper, it set the stage for the duel. 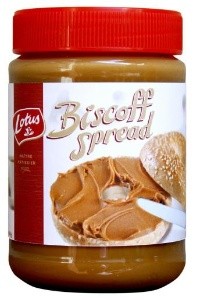 For lovers of peanut butter, this spread undoubtedly has the upper hand. It is thicker and creamier than Nutella, and the lids boasts that it is "made with original Biscoff cookies." In Europe, they eat the spread on toast for breakfast, but we've found that it tastes wonderful mixed into hot coffee, on Eggo waffles, or even on top of a banana. We're sure that Europeans would shudder, but hey, they were the ones to unleash their creation. The only downside is its unavailability. As of right now, you can only find Biscoff at Straub's, and a fourteen-ounce jar runs a steep $4.19. Not everyone would be willing to shell out the money, but after one taste of the creamy spread, we're sure that you'll be hooked. 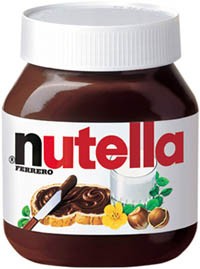 Nutella is better known in the United States than Biscoff, and you can find it at almost any grocery or convenience store. Also unlike Biscoff, the spread boasts more beneficial qualities. Nutella is made from real skim milk and cocoa, and contains no artificial preservatives. This gives the spread a lighter consistency than Biscoff, and the sweetness lingers in your mouth. Plus, there are more than 50 real hazelnuts in every Nutella jar. It's hard to imagine all of those nuts squeezing into thirteen ounces, but somehow, the Italians found a way. Delicious and nutritious: Does Nutella deliver the knockout punch?

It was a long and hard deliberation, but in the end, Gut Check decided on Biscoff. Both spreads taste good on almost anything and are best served on a large spoon: Serving Size, All. But while we could compare Nutella to the popular kid in the schoolyard, Biscoff is the one with the quiet confidence. You can't find Biscoff as easily, and it is a bit pricier. Yet it delivers a more unique taste, one that has been crafted by Belgian cookie experts. Who wouldn't love a spread created from the same recipe as a cookie? We're not discouraging you from an old favorite. But Biscoff proves that innovation and transformation are the name of the spread game.