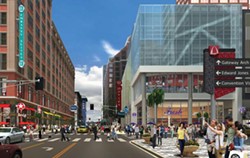 The Mercantile Exchange, the new retail and residential development in the former St. Louis Centre and Dillard's buildings downtown, announced earlier this month that restaurant and wine bar Robust (227 West Lockwood Avenue, Webster Groves; 314-963-0033) will open a location there. Robust is the second restaurant announced for the project after another location of Pi Pizzeria.

Robust owner Stanley Browne tells Gut Check that the new location will have "a similar style, the same menu, the same wine list."

Browne says the "synergy" between the retail and residential components, the latter of which will be known as the Laurel, appealed to him. He anticipates a spring opening.