Last week Gut Check spoke with Cheryl Hughey, the Ballwin-based writer who recently published Beyond Bacon Grease, a cookbook chronicling Hughey's journey to better health thought diet and nutrition. She lost 100 pounds in six months. But how does her modified diet taste?

This weekend we made Hughey's pasta con broccoli and compared it to a recipe purported to be the original from Cunetto's House of Pasta (5453 Magnolia Avenue; 314-781-1135).

Pasta con broccoli is really just the most basic Alfredo sauce - cream, garlic and Parmesan cheese - whisked together until just warm, then tossed with cooked pasta. The only difference is the addition of broccoli and mushrooms. Neither recipe diverges from this basis.

The traditional recipe calls for spaghetti, which might not be the best choice for thick, heavy sauce. But the sauce itself, which calls for shredded Parmesan, half and half and butter, is rich and clean, but heavy to the point of being gluey. If you're going to add butter to half and half, why not just got for heavy cream? This recipe's a little light on the broccoli and mushrooms, with only one-half pound of broccoli and a cup of mushrooms to cover four servings. 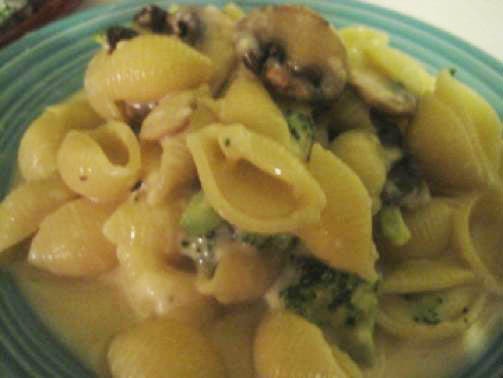 The reduced-fat recipe utilizes the same techniques with some ingredient changes. Canned fat-free evaporated milk stands in for the half and half. Instead of a quarter cup of butter, Huey opts for a tablespoon each of butter and olive oil. She also uses more vegetables - 1.5 cups of both broccoli and mushrooms. These changes knock out a lot of calories and more importantly, saturated fat, if we're looking at healthfulness instead of just calorie content. The increased vegetables provide more fiber, as well as more flavor and texture.

The recipe uses canned, grated Parmesan cheese instead of fresh shredded, and increases the amount by one-quarter cup. Medium pasta shells are used instead of spaghetti.

We love the increased amount of veggies and the use of shells instead of spaghetti, which not only stand up to the sauce, but carry little pockets of it. The sauce itself is decent, but could use a wee bit of the clinginess of the original; it tends to be thin. Flavor-wise, there's some metallic tang from the evaporated milk, and the sauce is a bit gritty from the grated Parmesan. That's probably our fault. In our impatience to thicken the sauce we used a lot more cheese than the recipe suggested. Otherwise, it's a viable substitute for the killer version.

A combination of the recipes would be optimal. Maybe go with the half and half, but use Hughey's olive oil tip to reduce saturated fat. Also take Hughey's cue and increase the broccoli and mushrooms; when a vegetable's in the name of a dish, it should be more than a garnish. Stick with her shells, but switch to grated Parmesan, which is smoother melting. The smaller amount of cheese will make a significant impact on the saturated fat and calories in the overall dish. Hughey's recipe makes about the same amount as the original, but she suggests splitting it into four to six servings. With a dish as heavy as pasta con broccoli, the smaller serving size isn't a bad idea at all.