Tidbits from Crostini, Robust and the Bleeding Deacon 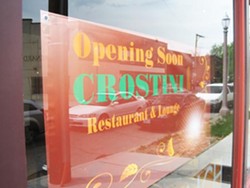 It's almost the weekend, we're about to go have drinks to celebrate the departure for bigger and better things of our two awesome interns -- including Gut Check's designated competitive eater Amanda Woytus -- so why don't we clear out the ol' restaurant-news backlog....

- Gut Check first told you in May about Crostini Restaurant & Lounge, a new Italian restaurant at 4501 Manchester Road in Forest Park's Grove district. Sauce reports that Crostini has set an opening date of Tuesday, September 6.

- Evan Benn of the Post-Dispatch learned that the folks behind the Bleeding Deacon (4123 Chippewa Street; 314-772-1813) will open a new restaurant, the Crow's Nest, at 7336 Manchester Road, most recently the home of the Red Lion.

- Finally, the Mercantile Exchange revealed the second restaurant that will open in the new Downtown development, joining another location of Pi Pizzeria: a second location of the wine and restaurant Robust (227 West Lockwood Avenue, Webster Groves; 314-963-0033).