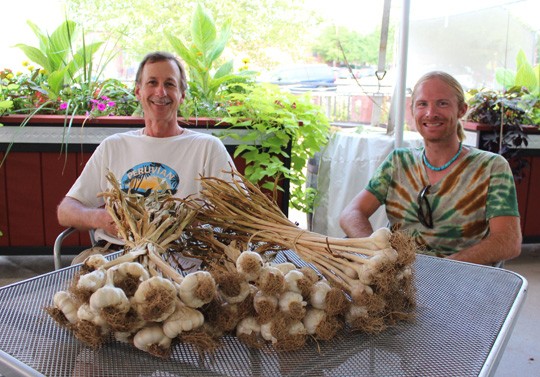 Schlafly gardener Jack Petrovic loves garlic, but he's tired of having to give his away. And that's fair, considering that the gourmet-variety garlic he harvests and uses year-round is as good as the crops imported from afar by some of the finest chefs in town.

"Everybody wants my garlic!," he says. "I hate charging for it, so I decided to teach people how to grow their own and support them in doing that. With minimal effort, they'll never have to go to the supermarket to pay for garlic again."

Currently launching Schlafly Bottleworks' (7260 Southwest Avenue, Maplewood; 314-241-2337) fall garden, Petrovic comes from a long line of family gardeners and is into his fourth season as Schlafly's homegrown horticulturist. He lifted up a set of burlap sacks in his garden, revealing tiny superhighways of ants digging out freshly-planted lettuce seeds from the ground.

"It's amazing what these little guys can do overnight," he says, marveling at the speed and vigor the tiny thieves work with. Next time, he'll use bottle caps filled with peanut butter to distract insects from the lettuce crop. They're learning something new every season. "Can you believe they pay us to do this?" he says, with a smile.

Petrovic, along with his assistant gardener Nolan Kowalski, will educate participants about the differences in garlic, how and when to plant, what to plant and why, and how to care for, harvest, cure, store and braid garlic during their "Grow Your Own Garlic" class.

"The class is geared towards gardeners of all levels and demonstrates the big picture of the world of garlic including a tasting of multiple varieties," says Petrovic, going on to explain that there are two types of garlic -- hard-neck and soft-neck. "The flavors are as varied as apples," he says, naming a red creole variety as his personal favorite.

Petrovic plants his garlic in late October or early November and harvests his abundant flowering plants in mid-June. When asked what he hoped people would take away from the class, he says, "A realization that they can eat much better than they do with minimal effort."

The third annual "Grow Your Own Garlic" class takes place in the Crown Room at Bottleworks in Maplewood on Saturday, August 20 at 10 a.m. Arrive early -- seating is limited for this free event.

Gut Check: Did you family garden together while you were a child? Jack Petrovic: Yes, they did. Ever since the beginning!

How old were you when you started gardening? Probably 6 or 7.

How long have you been tending the gardens at Schlafly, and what do you grow primarily? It's my fourth season this year, and I've been growing salad greens, tomatoes, beets and squash. We also have a cucumber patch that yielded over 100 pounds of cucumbers. These aren't just garden variety either. They're top grade, top-of-the-line cucumbers.

What is your favorite thing to do with garlic? Do you have a favorite recipe you'd like to share? My favorite thing is to eat it raw -- to chew up a clove raw with a peanut. It shocks my system in a very delightful way. But roasted is also very good. (See below for Jack's recipe for tomato garlic soup.)

What do you eat? I never get to eat fried foods, so whenever they're around, I'll eat them! That said, we also eat huge salads with tomatoes and cucumbers every day at home.

What's on your pizza? Tomatoes, basil and mozzarella.

What's in your omelet? Tomatoes, zucchini and mushroom.

Favorite recent food find? Sunchokes -- they're also known as Jerusalem artichokes. You grow them all summer, leave them in the ground and harvest them as needed during the winter. They're delicious and taste like water chestnuts.

Three words to describe your garden. Grown with love. It's the message on the backs of our Gardenworks t-shirts.

One food you dislike growing. This year, basil. Everybody I know grew mountains of basil, and I just struggled with it.

What is the most essential plant in your garden? Tomatoes.

What's the most surprising thing you've grown? Nopales, an edible cactus, surprises most people. It's gaining a lot of popularity in the St. Louis area. I've sold hundreds of them.

What is your philosophy in the garden? Lose the self doubt and the fear. Just know that the plants are going to carry their own. Do your best, but most importantly, just do it!

Best tip for home gardeners? Start small. Don't overextend, and prepare your soil. A lawn doesn't grow lush vegetables. Your backyard won't grow without enriched soil. At the Bottleworks' garden, I initially trench compost in long trenches and then cover them up (our chef Matt lost his shoe in one once). Also, I literally dig holes sometimes 4 feet deep and bury half a case of bad cabbage or whatever succulent feast I can find. I have some big happy worms -- let me tell you! We're trying to advance the soil about 900 years or so but do it in two or three years. Your typical urban soil just needs building before you can have a successful garden.

Proudest professional moment? I have two -- Chip Tynan from the Missouri Botanical Gardens and his wife visited and I'd never had better visitors. Joel Salatin from Polyface Farms has also come by. He's probably the most famous farmer in the United States, and he's in all the food movies because his farm is a perfect ecosystem. Both of them came down and spoke so highly of the garden. Those two people put it over the top for me.

What is the most difficult lesson you've learned in this business? Don't drag your feet if a crop isn't working. Tear it out and re-plant.

When did you know the gardener's life was for you? I guess when I got my picture in St. Louis Magazine. I was amazed that someone would take my picture for growing tomatoes and lettuce. 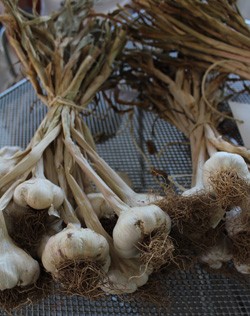 Add tomatoes and peppers and cook, stirring for one minute.

If too thick, add more stock, water or wine.

Season with the balsamic vinegar and sprinkle with chopped herbs.