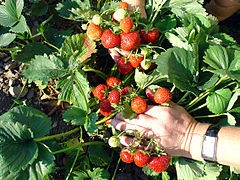 E. coli isn't the only problem plaguing strawberry farms in the Pacific Northwest. Last week three Washington State strawberry farms were fined for employing children as young as six years old to work in their fields.

Because most berry workers in the area are paid by how many berries they pick instead of an hourly wage, many struggle to make minimum wage. Many workers at large berry farms clear around $5 an hour, which leads to workers bringing their children into the fields to increase their yield. Washington's minimum wage is $8.67 an hour.

Kids are routinely picking 100 to 200 pounds of berries a day, work that's done while kneeling and stooping for long periods of time.

George Hoffman Farms, Columbia Fruit LLC, and Berry Good Farms were cited by the U.S. Department of Labor for minimum wage violations. The farm honchos, Marty Peterson, George Hoffman and Lee Nguyen, are required to take three years of training classes so they can understand why it's not right to let elementary school kids do hard manual labor because their parents are underpaid.

The three companies were fined a total of $73,000 for the nine underage children the feds found working in the fields. The farms are prohibited from selling the berries picked by underage workers.