Looking Past the Name at twinOak Wood-Fired Fare 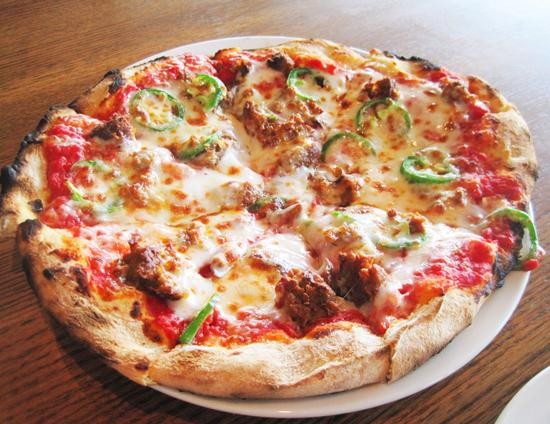 Even before twinOak Wood-Fired Fare (1201 Strassner Drive, Brentwood; 314-644-2772) opened its doors this June, the restaurant had attracted attention for its name -- its original name, that is: Taste Wood-Fired Fare. St. Louis already has a restaurant called Taste, and although this is a common word, as a certain other recent case has shown us, that fact isn't enough to stave off controversy.

A month after opening, Taste Wood-Fired Fare became twinOak Wood-Fired Fare, the new name reflecting both the kind of wood used in its wood-burning oven and that its owners are twins, Casey and Curt Friedrichs.

Curious to look past the name controversy, I stopped by for a recent lunch.

The restaurant has a clean, spare modern design. The kitchen, both the prep area and the wood-burning oven, is open to the dining room.

The menu includes wings, steaks and seafood (salmon), all of it cooked in that wood-burning oven, but pizza is the main focus here, so that's what I ordered. Specifically, I tried the "Gringo Star," topped with chorizo and jalapeño as well as tomato sauce and mozzarella. The pie ($12) is enough for one very hungry person.

twinOak's oven fires at over 900 degrees Fahrenheit, so as is the custom in this kind of pizza, the bottom of the crust had numerous scorch marks. The crust as a whole had enough body to balance out the burnt bits.

The chorizo and jalapeño had the expected kick, and the cheese had a nice balance of bubbling and browned. All in all, a solid pizza, and definitely worth a return visit for closer examination.