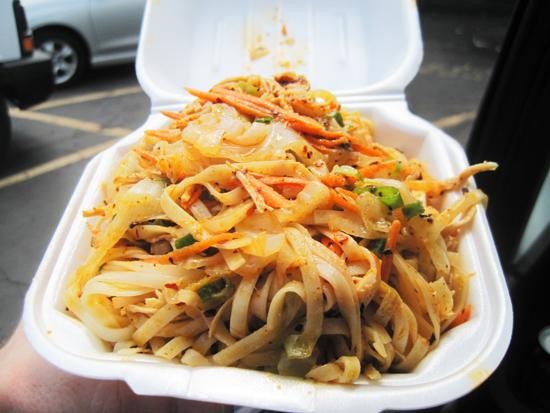 The Place: Famous Szechuan Pavilion (8950 Manchester Road, Brentwood; 314-685-0888), a drive-thru-only noodle hut that opened earlier this year west of the intersection of Manchester and Brentwood Roads.

That's not a misprint, by the way. This meal cost only $3.99. And while the takeout container can fit in the palm of my hand, I have relatively big hands. Unless you haven't eaten in a while, the serving is adequately sized.

The Verdict: The "House Spicy Noodles" aren't the most intriguing item on Famous Szechuan Pavilion's brief menu, but this was a my first visit, and they seemed like a good place to start.

The noodles are served cold -- at least that's how the woman who took my order described them, though I'd describe the temperature as cool rather than cold. You choose your level of spice on a 10-point scale. Recalling my encounters with Szechuan cuisine at the nearby Joy Luck Buffet, I opted to start at a 7 rather than a full-throttle 10.

The noodles are flat ribbons tossed with vegetables and a few bits of shredded chicken slicked with a very thin sauce, perhaps nothing more than oil. The heat was potent, though not overwhelmingly so -- about what I would expect from a 7 out of 10. The tingling for which Szechuan peppercorns are famous was present but short-lived.

If you've never had Szechuan cuisine, the "House Spicy Noodles" would be a good introduction. It certainly has me ready to return to try some of the more adventurous fare. And at four bucks (plus tax), you'd have to look pretty hard to find a better value.