# 68: Lamb Burger at The Scottish Arms 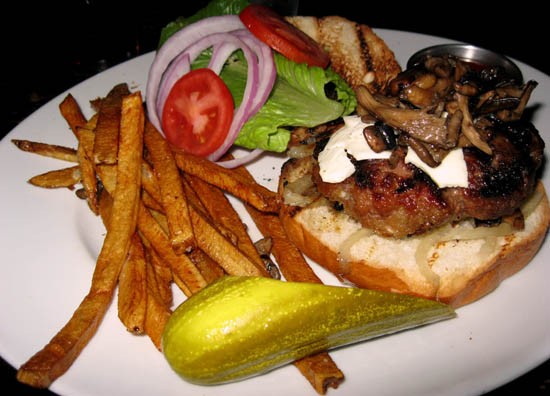 Pubs seem to come in one of two varieties -- those filled with kitsch and bland fish and chips, or those filled with authentic food, drink and conversation. The Scottish Arms (8 South Sarah Street, Central West End; 314-535-0551) is one of the latter. A new summer menu is dotted with words like "bubble, squeak, bangers and mash," and kilt-clad waiters serve diners at dark wood tables lit only with a sputtering candle.

In the midst of the Scottish pub fare is the lamb burger with goat cheese and fennel jam. It's an American standard with a Great Britain twist. The eight-ounce lamb burger is tender and meaty, with the perfect grilled char and none of the heavy grease that drips out of other burgers. It comes served on a crispy toasted bun and is accompanied by skinny fries and a slab of pickle.

At the Scottish Arms the goodies don't come on the side, they come on top. You can top a burger with almost anything these days, but the goat cheese and fennel jam combo is an unusual treat. Heavenly goat cheese adds creaminess and provides a nice contrast to the crusty outside of the burger. The fennel jam features crisp strips of fennel bulb for a pop of flavor and texture. It gives the burger a bit of sweetness in a completely new way from your standard ketchup.

Add a dose of tender sautéed mushrooms or onions, and this burger is complete. The kilts may be a bit kitschy, but the folks at the Scottish Arms can craft a solid burger with a blend of toppings you won't find at any other pub.