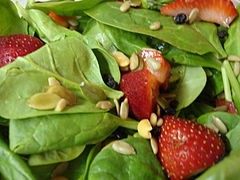 Just because it's organic or came from the farmers' market doesn't mean food's immune to contamination, a scary lesson being learned in Oregon, California, Nevada and Arizona.

In Oregon, at least sixteen people have been sickened and one has died due to eating strawberries tainted with E. coli. This is the first time an E. coli outbreak has been linked to strawberries.

The contaminated berries have been traced to Jaquith Strawberry Farm, which sold the fruit to people who then sold it at roadside stands and farmers' markets. The Oregonian explains how the outbreak was likely caused by deer feces.

Fresh & Easy Neighborhood Market Inc., which operates stores in California, Arizona and Nevada, has issued a recall on its store-brand five-ounce bags of organic baby spinach. Random testing revealed listeria contamination in one bag of spinach. No illnesses have been reported and no cause for the contamination has been released.