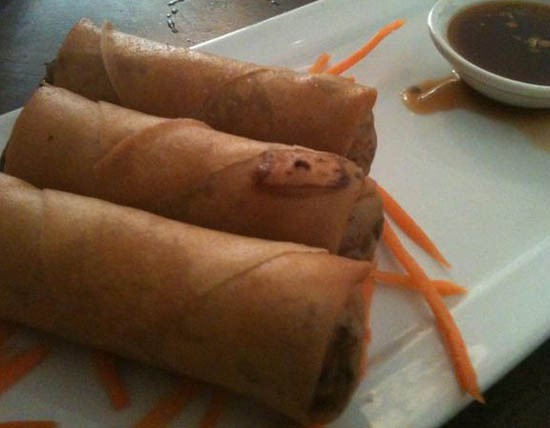 So ubiquitous, the pork spring roll. Or egg roll. By any name, it's the same creature -- usually crispy on the outside, wrapper still a little chewy on the inside, filled with a pulverized blend of...stuff.

Not at Bobo Noodle House (278 North Skinker Boulevard, University City; 314-863-7373), where the Crispy Pork Spring Rolls are just that -- crispy. The thin wrap doesn't leave any room for chewiness. Just flaky layers of golden crispies. And always flaming hot, since they're not allowed to wallow in their own grease post-frying. A tidy little bed of carrot shreds isn't just pretty but keeps the rolls from getting bogged in any residual cooking oil.

There's no questioning the fillings, which maintain their integrity. The pork's surrounded with cabbage, carrots and onions cut into super-thin strips, each flavor present along with a hint of ginger. A soy-based dipping sauce brightens the overall flavor with a salty bite.

Asian rolls served in a bag will never do after this.