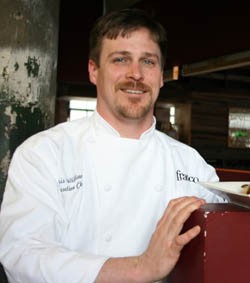 Last week Eater asked chefs if they thought culinary school was worth the time and expense for aspiring chefs. The answer was a resounding "probably not."

The discussion made us wonder how well-educated some of St. Louis' favorite chefs are, so we culled the archives for some answers.

Peio Aramburu of Bistro 1130: "I went to culinary school in San Sebastián, Spain. It was a three-year program that included cooking skills, management and front of house. The emphasis was on cooking, though, because San Sebastián is renowned for food."

Chris Williams of Franco: "The CIA."

Marc Baltes of the Pi Pizzerias: "I went to CIA in Hyde Park. School was good, but I learned more in my six-month internship than in the eighteen months of classes."

Reine Bayoc of SweetArt Bakeshop: "I graduated from SLU with a degree in English and French."

Chris Bork of Blood and Sand : "I attended Westminster Kingsway College in London." Steven Caravelli of Entre and the Mud House: "First, earn a degree in journalism at the University of Missouri-Columbia while working in a gourmet shop. Over the course of the next six years, work days as a bank teller and nights in the kitchen at Chez Leon while writing the occasional article for Sauce until there's a full-time position available at the restaurant. Make a stop at a local culinary school for one semester."

Miguel Carretero of Guido's: "I went to college for a short amount of time, but I was trying to run a restaurant at the same time. I opened my first restaurant at age eighteen, a little pizza place on Morganford. I just couldn't balance both."

John Caton of Benton Park Cafe: "I attended the University of Missouri-Columbia. I graduated with a bachelor's degree in the hotel and restaurant management program."

Colleen Clawson of Big Sky Cafe: "I went to North Park University for fine arts and philosophy. I showed up for classes at L'Hotellerie in Belgium while visiting friends."

Nate Hereford of Niche: "I went to the Oregon Culinary Institute in Portland, Oregon. I was a little older when I went to school, and I had been working in the industry for four years. I knew I was passionate about it, I worked really hard in school, pushed myself extremely hard, knowing that it would pay off. While in school, I noticed most of the other students didn't push themselves to constantly be researching food or cooking. I knew school was what you made of it. I had already been to college, etc., and I knew that this was what I wanted to do, so I didn't mess around at all. I never missed a day -- well, actually, the only day I missed was because I flew to Chicago to stage at a restaurant. But nevertheless, I didn't mess around. I took it seriously. On top of that, I worked a full-time job at this spot called Acadia Bistro.

Bob Colosimo of Eleven Eleven Mississippi: "I'm a graduate from the Culinary Institute of America in Hyde Park, New York."

Ericka Frank of The Cakery and the Cup: "I majored in nutrition and dietetics in college and came to St. Louis to complete my master's degree in medical dietetics from SLU."

Agi and Aaron Groff of 4 Seasons Baked Goods & Catering: Agi: "I went to school in Germany and got a master's in teaching with a specialty in languages. I then went to the Culinary Institute of America.

Aaron: "We met when we were both enrolled in the associate program at the CIA. Then a few years later, we decided to get our bachelors' from the CIA as well."

Mary Harden of Serendipity Ice Cream: She chose the in-state college farthest from her hometown -- Vincennes University -- and picked the only major that seemed remotely interesting: culinary arts.

Eliott Harris of Miso on Meramec: "I attended SLU, where I received my undergrad in communications and attended Johnson & Wales in Vail, Colorado, in 1996."

Freddie Holland of Match Foods, Inc.: "I graduated from the Culinary Institute of America in Hyde Park, New York, in October 1990."

Beckie Jacobs of Serendipity Homemade Ice Cream: "I have a bachelor's degree from Mizzou, I attended the culinary program at Forest Park, and I went to Ice Cream Schools at the University of Wisconsin and Penn State. I continue my education in my field by attending 'ice cream camp' each November."

Christopher Lee of Cafe Ventana, Sanctuaria and Chuy Arzola's: "Hard knocks! Apprenticed under the late Jean Claude Guillossou and Cafe de France's Marcel Keraval, both old-school French, both masters in their own right and both dedicated to technique and consistency."

Ivy Magruder of Vin de Set: "I went to Johnson & Wales. At the time, there was a campus located in Charleston, South Carolina, and that's where I went."

David Molina of BARcelona Tapas: "I didn't attend culinary school. I have been fortunate to work for some great chefs."

Clara Moore of Local Harvest Cafe and Catering: "A few years at Forest Park Community College and a degree at Baltimore International College."

Robin Murphy of Baileys' Chocolate Bar, Rooster, and Bridge Tap House & Wine Bar: "I didn't attend culinary school, but I did attend college. I was very fortunate to have two apprenticeships in California for baking and pastry and that was like taking a crash course of what you might learn in culinary school; I loved it."

Jane Muscroft of Queen's Cuisine: "I went to catering college. I studied home ec in school; it was required for boys and girls, so there was no getting out of it. I loved it and considered being a home ec teacher. But as a teenager, I was painfully shy, and the thought of getting up in front of a room full of people...."

John Perkins of Entre: "No." He has a master's degree in theology.

Jeff Robtoy of the Bleeding Deacon Public House: "I received a Bachelor of Studio Arts degree from Southern Illinois University."

Lou Rook III of Annie Gunn's: "I received a B.A. in food service and lodging management from the University of Missouri, and an associate's degree (AOS) from the Culinary Institute of America at Hyde Park."

Anthony Scarato of Anthonino's Taverna on the Hill: "My brother and I both completed hospitality and culinary programs at St. Louis Community College-Forest Park. I went on to Saint Louis University to complete my B.A. in management and minor in restaurant management."

Marilyn Scull of Ann & Allen Baking Company and Park Avenue Coffee: "I learned by observing my mother and others, and by trial and error."

Lynne Truong of Banh Mi So #1 Saigon Gourmet: "No."

Scott Truong of Pearl Cafe: "I have the best teachers: my elders. I continue to learn and perfect my skills by listening and observing and attending most family gatherings because that's when the best of the best chefs come out. We cook, and we eat the fruit of our labor!"