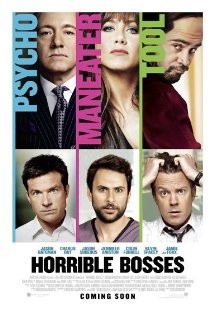 Movies are like food. Sometimes you crave an intense, challenging experience, and sometimes you just want something that's easy to scarf down and doesn't require much thought.

Horrible Bosses is a meat-and-potatoes kind of flick. Like a big fat burger with a side of fries, it has no pretensions. It is what it is -- a funny, light and somewhat lazy comedy. The jokes aren't challenging. The plot's predictable.

That predictable plot, as completely divulged in the trailer, involves three buddies, Nick (Jason Bateman), Kurt (Jason Sudeikis) and Dale (Charlie Day) frustrated with their (ahem) horrible bosses. After a beer-soaked evening of bitching about work, they decide that the solution is clear: Let's just kill the jerks!

In the name of research, the guys make the offensive decision to drive to the worst part of town and find, essentially, the bar with the least white people. Because, you know, that's where the seasoned murderers are likely to hang out. As irksome as this is (it's made a little less so by the fact that Jason Sudeikis nearly gets his teeth kicked in by the bartender) this is how the viewer is introduced to the gem of the film -- Motherfucker Jones (Jamie Foxx), an ex-con of sorts who dabbles in murder-for-hire and advises the protagonists in their murder scheme for a nominal fee. MF Jones is MFin' hilarious, not to mention endearing.

Overall, the cast was star-studded and fantastic, despite the fact that Dale was essentially Charlie from It's Always Sunny in Philadelphia (they even have him do a lawyer bit!), albeit sans incontinence and with a steady job. And though we absolutely love Charlie, we're sure Day has a little more range than he's been given credit for. Likewise, Jason Bateman's character was Michael Bluth. We would've loved to see a lot more of Foxx portraying the all-bark-no-bite Motherfucker. And Jennifer Aniston is simply not believable as the abusive, sex offender psychopath type. Sorry Jenn, but you'll always be the good girl.

We followed up this meat-and-potatoes comedy with -- what else? -- a giant hunk of meat and a pile of deep fried potato slices at Market Pub House (6655 Delmar Boulevard, University City; 314-727-8880). The pub serves up thirteen different burgers and will substitute a veggie patty or a grilled portabella on any of them if you're so inclined (we were not so inclined).

We opted for the "Original Burger," a half-pound burger on a semolina bun with lettuce, pickle, tomato and pepperjack cheese cooked medium-rare. The effort that went into actually fitting this mammoth of a sandwich into our mouth was well worth it. The burger wasn't overcooked, and therefore maintained its flavor. Topped with just a few veggies and the lightly spicy slice of pepperjack, this burger's near perfect in its simplicity. It's just plain good. The French fries are lightly seasoned and served with a chipotle mayo that, though definitely delicious, is a little heavy when you're already midway through eating a half-pound burger on a huge bun with a generous helping of fries.

Just as with Horrible Bosses, when it comes to the Pub House's burger menu, what you see is what you get. A satisfying, unchallenging, easy feast. Of course, with Bosses , there's no heartburn and far less guilt.