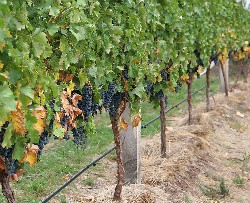 In these uncertain times, opening a business is an intimidating venture. Jenny Turner and a handful of her ten siblings have persevered through years of waiting and cutting through red tape while the city of Bridgeton debated approving the use of a barn on Boenker's family farm as a café/wine bar and altering the zoning ordinance to include wineries.

Yesterday, the city made the necessary change to its zoning ordinance, bringing the family one step closer to realizing its dream -- keeping the farm that's been in their family for six generations, by way of adaptation.

Turner took a break from writing to her brother about plans for the wine bar to discuss the future of the farm with Gut Check.

Gut Check: What do you currently grow at Boenker farms?

Would the entire farm be converted into a winery, or would some of the crops remain?

We'll keep our kitchen garden because we want to have fresh tomatoes, and maybe we'll even plant onions again and garlic like my fathers always grew. We have 65 tomato plants in this year, because we all love tomatoes! So we want to have a home garden going. My brother plans to put some fruit trees back on the hill. But mostly the grape operation. The first five years we'll strictly be selling other people's wine at the wine bar and small café.

How did you become interested in opening a winery?

My ten siblings and I all grew up on this property. It's been in the family for six generations, and we just don't want to sell it. Especially now, the market's so bad. It's no time to sell, and why not do something that will make us able to keep the farm in the family?

I imagine there's a lot involved in opening a winery. Where do you start? What are the steps?

You start with getting the town of Bridgeton to rezone the building, liquor license and permits. Right now the barn is strictly a barn garage, we have to clear that up and get it up to code for a restaurant.

You mentioned that for the first five years the cafe and wine bar would strictly serve other winery's wines. Do you plan to have the winery operating in five years?

Oh I hope so, yes. We have to get the soybeans out of the field, and grapes take five years to produce enough juice for wine. So we have to plant first. But in the meantime, we have to start the little business of a winery and café.

When do you expect the café to be open?

I was just e-mailing my brother about that! I hope maybe by springtime, if all the permits come through with Bridgeton; all eight members of the council voted "yes" that it could go ahead, but that was just the rezoning from the residential three acres into the business property for the wine bar and café. This has taken about two and a half years to get this rezoning approved. So hopefully the permits for rebuilding and liquor licensing won't take that long. But everything in government takes a long time.

Will the family be involved in the wine-making process or will you bring wine-makers in?

My father made wine every year. We still have some in the basement from Dad's wine-making! We will bring in experts to bottle the wine, but that's at least five years down the line. Other vineyards around here have offered to bottle the wine for us. It's very reciprocal -- vineyards, when they're starting out, others will help them.