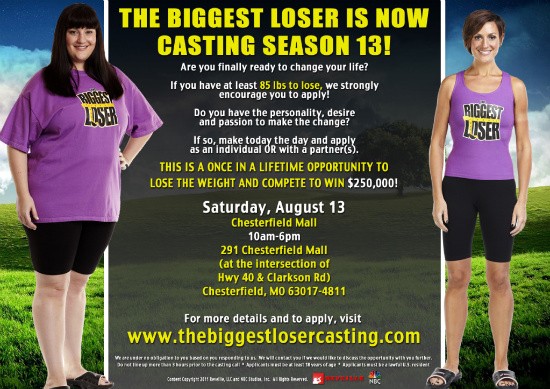 Some lucky St. Louisans could be next in line to get their asses kicked into shape by Anna Kournikova.

In search of season thirteen contestants, NBC's feel-good weight-loss reality show The Biggest Loser is coming to Chesterfield Mall on August 13 to hold auditions as part of a nationwide casting call. To compete on season thirteen, which begins airing in January 2012, you must be at least 85 pounds overweight, and the more charismatic and outgoing you are, the better. (This is reality television, people. No Debbie Downers allowed.)

The reward for shedding hundreds of pounds while America watches? The grand prize for winning The Biggest Loser is a hefty sum of $250,000. That's a lot of dough, and in a town with plenty of good restaurants like St. Louis, it would be pretty easy to succumb to temptation after taking home the prize. Were Gut Check the show's weight-loss champ, we know what we'd spend the money on: delicious fatty food. If we could eat through 250,000 bones, here's what we'd order.

9. Concretes from Ted Drewes: We're not sure what's more terrifying about the prospect of eating approximately 50,000 concretes: the damage to our waistline or the monumental brain freeze we're sure to endure.

7. Potato soup at John D. McGurk's Irish Pub: Beating everyone on The Biggest Loser is going to take a lot of energy. We plan on recovering from all those grueling workouts with lots of carbs.

6. Cupcakes from Jilly's Cupcake Bar: Does it count as healthy if we order the carrot cake cupcakes? The real challenge here is not slipping into a sugar coma after we've eaten a few of these baked treats.

5. Pizza from Pi Pizzeria: It doesn't really matter what you order from Pi as long as it's deep-dish. We want to get the most pizza for our prize money.

4. Beer for all at a baseball game! This one isn't food, but in an attempt to make some new friends, we'd buy everyone in our section at Busch Stadium a beer. We don't have enough prize money to take everyone out to the ballgame, but wouldn't this be a great consolation prize following a recent trade?

3. Various burritos from Nachomama's: Thinking about this one, we might have made a mistake. Just one will fill you up.

2. Doughnuts from St. Louis independent shops: In light of a recent Tour D'Onut Gut Check huffed and puffed through, we realized had we had $250,000 on the bike ride, we could have purchased 416,666 doughnuts. Not even riding our bike some twenty miles on the tour is going to burn those calories.

1. Shaved ice from Tropical Moose: To help us keep cool in this miserable weather, we'd order shaved ice after shaved ice, burning through our prize money.