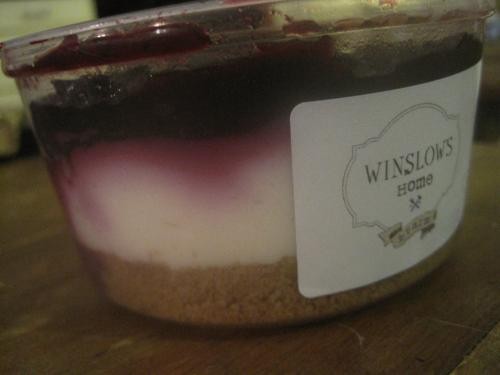 National Cheesecake Day was on Saturday, but it was way too hot and humid to bake a decent cheesecake. Pre-made ones were weeping like, well, everyone who's wilted by the heat.

The solution lies in no-bake cheesecake. Not that gelatin-based stuffed from a box. Certainly not when Winslow's Home (7213 Delmar Boulevard, University City; 314-725-7559) has no-bake cheesecake in the to-go case.

With three layers in a carry-out bowl, it's more parfait than cake but lacks nothing that makes cheesecake worthy of a national day of celebration: crumbly graham cracker crust, dense cheese that's both tangy and sweet and a sticky blueberry topping.

The cheese layer is solidly creamy and rich, succeeding where most no-bake cheesecakes fail: It could stand up on its own without getting jiggly or soggy. It takes a moment for the cake to melt on the tongue, long enough to savor the gentle tartness of the cheese.

Although the top layer looks like a simple blueberry jam, it's far more than that. Forget the thickening agents and cloying sugar. This topping blends the robust sweetness of a blueberry jam filled with fresh, whole berries. The fruit hasn't been cooked to death; the berries are still firm enough to burst when bitten.

A cake in an eight-ounce container costs $6 and will easily yield 2-3 servings.