"It's sort of like being kids, staying up past your bedtime and eating dessert for dinner," chef Steven Caravelli told members of his first sold-out Entre Underground crowd as they finished his four-course, all-dessert menu. And he was right. Workday be damned, the Thursday-night dinner focused on grown-up desserts and beverages. 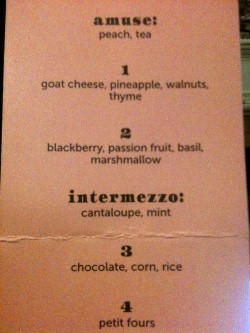 As with all of Entre's underground dinners, guests learned the location -- an event space on Boyle -- that morning. The menu gave hints of what was to come.

The night began with a bubble tea amusé, with caviar-sized peach bubbles in a tall shot glass, topped with aerated black tea.

Next came a tartlet filled with a passion fruit cream, topped with toasted marshmallow and fresh blackberries, all atop a swirl of thickened sweet basil sauce.

This wasn't a Willy Wonka dinner. Chocolate didn't appear until the fourth course, in the form of a soufflé-like microwaved cake, topped with fresh peaches and crisp rice. Next to it, a scoop of roasted corn ice cream and three dabs of dark caramel sauce. 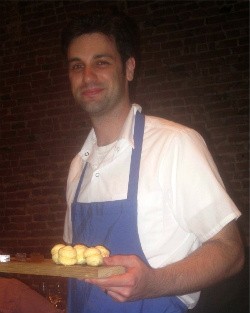 The final course was the most traditionally sweet of the night but still aimed for complex flavors and textures instead of cloying, over-sugared sweetness: two petit fours, a dense citrus gel and light, crackly limoncello macarons.

The new pairing of Caravelli and Entre founder John Perkins has been a long time coming. They've known each other for more than a year, and once Caravelli found himself without a restaurant, the time seemed right -- despite the occasional eighteen-hour day of cooking at the Mud House followed by Entre events. "I'm making eggs and French toast in the morning, and doing this at night," Caravelli said as dinner ended. "And it's great."