If Tacos Make People Smart, Why Are so Many Taco Fans Dumb? 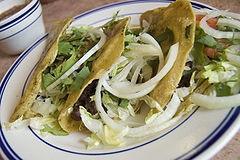 A new study indicates that tacos can make you smart.

Specifically, rats given cumin-spiked water learned things more quickly, and were more resistant to a drug that mimics the effects of Alzheimer's. Earlier this year, rats whose diets were 5 to 15 percent cilantro also showed signs of having stronger brains.

We know some pretty bright taco-eaters who lend credibility to these studies. So why is it that so many taco-lovers are portrayed as being complete dumbasses?

Gir from Invader Zim had a serious love for tacos.

Conan O'Brien has a dancing taco.

Beavis and Butt-head in Spanish class.

Blowing up a taco, Beavis style.

Try getting the anime taco song out of your head before it destroys half your brain cells. Eric Cartman's hand as J.Lo, singing her racist hit, "Taco-Flavored Kisses."

Some geniuses brawl at a Taco Del Rio.

Psychostick ruins tacos for everyone.

Jack in the Box taco munchies.