This is part one of Emily Wasserman's Chef's Choice profile of chef Colleen Clawson of Big Sky Cafe. Part two, a Q&A, is available here, and part three, a recipe from Clawson, on Thursday. 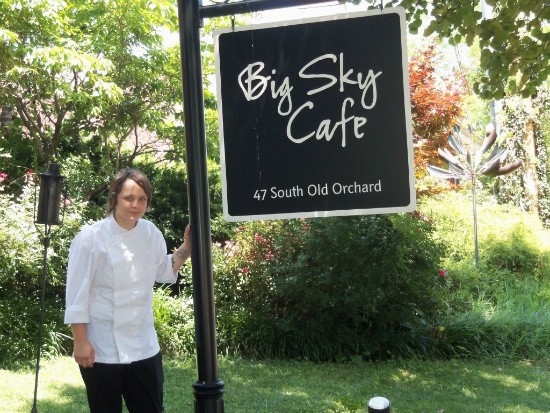 Trying to find the Big Sky Cafe (47 South Old Orchard, Webster Groves; 314-962-5757), Gut Check got lost. Driving through downtown Webster Groves is often like going through a labyrinth, complete with side streets and sharp turns that confuse the more directionally challenged. The restaurant sits atop a hill, its outdoor patio and front door obscured by huge, flourishing trees, potted plants and flowers, and a grassy sidewalk.

When chef Colleen Clawson greeted us at the door, though, it was like being welcomed home. She asked if we had ever been to Big Sky, and when we replied "No," she enthusiastically gave us a tour of the restaurant's interior and exterior. Colorful glass mosaics and eclectic art cover the walls, and fresh potted plants sit on tables throughout the restaurant.

Outside on the patio, Clawson showed us her personal collection of herbs with a pride akin to a mother talking about her children. Her enthusiasm for fresh ingredients is evident, and this passion is imperative to her career as a chef.

"Once I got into the industry, it was like being infected by a bug," she says. "There was always something happening, and cooking became a compulsion. I feel like I have to do it."

Having grown up as one of five children in Kirkwood, Clawson caught that culinary bug early. Cooking was integral to Clawson's upbringing, as both of her parents encouraged cooking together as a family. She and her siblings were granted age-appropriate tasks, and as soon as they were old enough to set the table, they were expected to help with family meals.

"Everyone had to be home when the street lights came on, and we always ate and prepared dinner together," she says. "Our kitchen table was a picnic table with a bench. There was always some friendly competition to see who was going to make the best dinner." 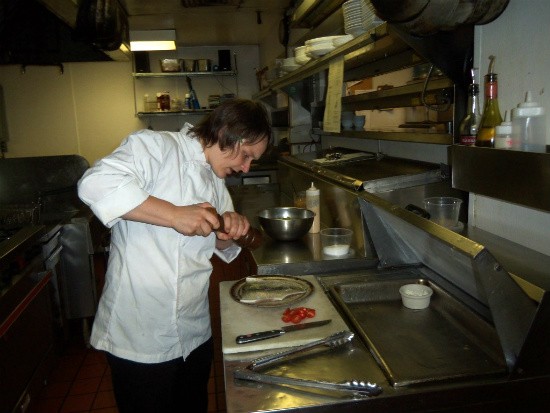 Clawson developed a love for food at an early age, citing a family classic, "A Little Bit of Lunch" as one of her favorite childhood meals. "A Little Bit of Lunch" included a big tray of pickles, cheese, sardines and meat, which Clawson, a staunch vegetarian, wouldn't touch. The family would eat the meal during the day, but most often as a midnight snack.

During her teenage years, Clawson pursued work at many restaurants, but her first food job came at age fourteen. Her current penchant for fresh, local ingredients seems ironic when she admits that her first job was at Dunkin' Donuts.

Despite her brief culinary forays during high school, Clawson decided to pursue a bachelor's degree in philosophy and fine arts at North Park University in Chicago. Her real break came when she visited a friend at the famous "L'Hotellerie" School of Hospitality and Culinary Arts in Belgium.

"I went to a couple of my friend's accounting classes, but it was hard to understand because it was in French," Clawson says. "I wandered around the school and walked into a kitchen. They handed me whites, told me to change, and I did."

Clawson spent the next few years travelling and working in Europe, first living in Belgium but also spending time in Paris and Amsterdam. One of Clawson's favorite places to live was Rennes, a French town famous for its seafood and savory crepes.

"France suited me well, the free way of living and the sense of community," Clawson says. "You can find that where I live here in St. Louis, on the south side, but France really advocates for that autonomy. They encourage you to drink deeply from the cup of life."

After drinking from Europe's proverbial cup, Clawson returned to the United States and worked at a prep cook and food expediter at Frazer's. Soon after, Clawson moved to Riddle's Penultimate Café & Wine Bar, where she worked on the line.

"Frazer's was my first 'for real' job, but working in both restaurants taught me a lot and nurtured an innate passion."

Clawson especially admired Riddle's devotion to providing customers with fresh, local ingredients, a tradition that she continues at Big Sky Cafe. During our interview, she got up to accept a delivery of fresh mozzarella from a mysterious bearded man. When she got back to the table, she explained that the man was Andy Ayers, the previous owner of Riddle's and her old boss. Now a local food purveyor, he delivers Clawson some of her freshest ingredients.

"[Ayers] is a huge inspiration because at the time I worked for him, Riddles was the only restaurant with local food," Clawson says. "Restaurant employees sat around picking bags of freshly delivered basil, or all of a sudden, strawberries or shitake mushrooms would show up. Now he's bringing me food, so the cycle continues."

Clawson continued to rise up the culinary ladder as the head chef at Venice Café, but she heard about an opening for a chef at Big Sky Cafe's sister restaurant, Remy's Kitchen & Wine Bar. She spent the next few years working under the tutelage of Remy's chef and owner Lisa Slay, and only arrived at Big Sky Cafe by a stroke of fate.

"I was pregnant, and they sent me to work at Big Sky Cafe because there are steps to the walk-in refrigerator at Remy's, and they didn't want me to fall," Clawson says.

After the birth of her son, Clawson took two years off, and was looking for career guidance. She briefly returned to Venice Café, but called Slay for advice. Slay invited Clawson to return to the restaurant, where she now works as the head chef.

"Lisa Slay is definitely a mentor for me, and I have total respect and admiration for her," Clawson says. "She's one of the first women chefs in St. Louis and has really inspired me. I hope I can make her proud," Clawson says.

When we ask what Clawson likes to do in her spare time, she laughs and jokes, "What spare time?" As a mother, head chef and gardener, there's little. But when she does have time, she enjoys doing yoga, cooking with her son, enjoying live music, reading, writing and drawing. Her diverse interests inspire her cooking and provide a good example for anyone who is trying to find his or her life's passion.

"Being a chef is a marriage of things I'm interested in: art, chemistry, biology, psychology and social experiments," Clawson says. "All these factors stimulate me on different levels. My advice for anyone who is looking for what they want to do in life is to try as many things as early as possible. There won't always be that time and freedom, so you have to try things to know if it's going to suit."