Sober and Thirsty at the Movies? Bored at Work? Just Drink Portable Wine. 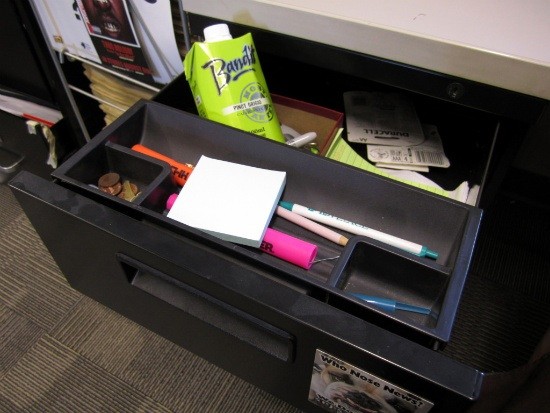 Last week, Gut Check suggested that instead of purchasing pricey booze at concerts and baseball games this summer, you should just sneak in your own portable wine and Pocket Shots.

And then Gut Check realized you could imbibe indoors, too. Picture it: Instead of buying expensive, nonalcoholic concessions at the movies, you can just drink wine. Tired of being sober at work? Again, wine. Are you with us, people?

But Gut Check would never suggest you pull a stunt like this without our testing it first, dear readers. We decided to give a couple of these products a go and sneaked them inside the movies and drank them at work to see if the average thirsty, desperate wine lover could, too.

First up, the movies. We'd been dying to see Harry Potter and the Deathly Hallows: Part 2, but you know what would make the experience even more magical? A special potion. Accio Vendange wine! A portable cardboard boxed wine, its six glasses of chardonnay are sure to get you through the two-hour long flick.

Sneaking it past the movie theater employees was a pretty simple task. It's easy to hide in a handbag, though if you're trying to conceal in on your person, you might want to downgrade to something smaller. It's pretty tasty for boxed wine, too. There's just one problem: It's six glasses of chardonnay. By the time Harry, Ron and Hermoine broke into Gringott's, we were two glasses deep and showed no signs of stopping. And when Harry realizes he has to kill Voldemort's snake to defeat the dark wizard, we were showing off our ability to speak parseltongue. We just have one question: How did HP 7 Pt. 2 end again? We might be heading back to the movie theater for a repeat showing.

Next on our to-do list: drinking at work. We knew just the place to do it, too: the RFT 's weekly Monday-morning staff meeting. Gut Check International HQ isn't exactly known for our traditional values, but drinking during a meeting at 10:30 a.m. probably isn't encouraged...

But it looks like we'll never know! Sipping our Bandit pinot grigio proudly, we arrived at the staff meeting and took a seat. Because Bandit looks so much like a juice box, no one really noticed, aside from one staffer who happened to be hungover from the night before. Always generous, Gut Check shared a little of the boxed-wine wealth with her.

Like Vendange, there's a drawback: It's a lot of wine for the workplace. Before you try it, note that one tiny box of Bandit is actually two-thirds of a wine bottle. You won't be doing much work after.