Gut Check Indulges in Baked Goods from the Tour D'Onut 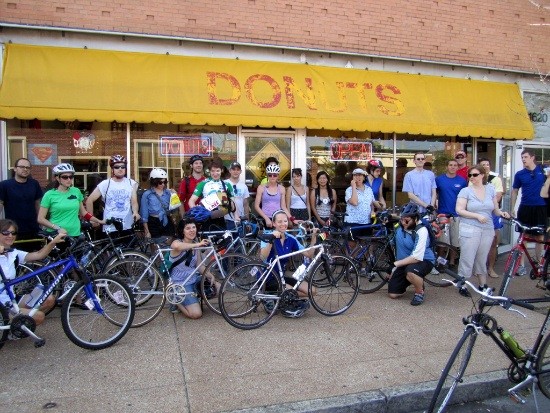 At 9 a.m. Saturday, the inside of Soulard's John Donut was packed with about 30 people dressed in their athletic finest, enjoying breakfast around the bright yellow tables. They're participants in the Tour D'Onut, a bike mosey stopping at St. Louis' independent doughnut shops, and though they've just eaten a bunch of fried food, they're gearing up to bike six miles to the next location -- where they'll eat more fried food. One has already inhaled three doughnuts. "Just so you know, we all predict barfing!" the riders, hopped up on sugar, joke with each other.

The Tour D'Onut started with a group of friends who share a mutual love of biking and doughnuts, says organizer Will Fischer. But unlike a lot of people, these fanatics don't mind combining the two on a hot July morning. Once the idea was born, a plan was hatched: Gather like-minded bike-and-doughnut enthusiasts, and take a two-wheeled tour of doughnut shops. The group plotted a route around five doughnut shops: The starting point, John Donut (1618 South Broadway, Soulard; 314-241-3360), St. Louis Hills Donut Shop (6917 Hampton Avenue, St. Louis Hills; 314-481-6050), Donut Drive-In (6525 Chippewa Street, St. Louis Hills; 314-645-7714), O'Fashion Donuts (5120 Southwest Avenue, Tower Grove; 314-772-0398) and World's Fair Donuts (1940 South Vandeventer Avenue, Tower Grove; 314-776-9975). Promoting bicycling as a means of transportation and exercise turned out to be a happy accident, but the emphasis on eating doughnuts -- lots of 'em -- from independent St. Louis shops was king.

A little-known fact: Although not fond of yaking, Gut Check International HQ loves nothing more than eating a handful of doughnuts after a rigorous bike ride in near-90 degree weather. If these doughnut enthusiasts claim to know the best spots in town for sugary breakfast treats, we're going along for the ride to see for ourself. Heat advisory? What heat advisory? We pulled out our fat pants and caught up with the Tour D'Onut riders to taste doughnuts from each spot. Using the Tour D'Onut route and Gut Check's tasting notes, you can go on your own doughnut adventure, by bike or by car. The best part? Gut Check only had to fork over $5 for the food. The downside? You might feel like curling up in a ball and praying diabetes doesn't set in after this sweet tour. 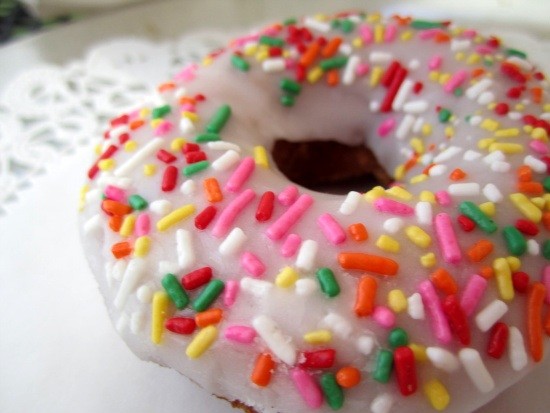 With four more stops in front of us, Gut Check decided to steer clear of any pastry you might find at Krispy Kreme -- after all, this is a tour of St. Louis' independent shops. Dunkin' isn't on the menu. So after inquiring about John's bestsellers, we passed on the glazed and went straight for the apple fritter. OK, it's not technically a doughnut, but we've got plenty of time to pick one up elsewhere.

The fritter was a pleasant surprise. Dark brown and lumpy, we were a little dubious -- until we bit into it and discovered it tasted just like apple pie crust. Unlike the other stops on our doughnut tour, John's has plenty of tables to sit and enjoy your breakfast, making it a good spot to dine in. But beware -- if you consume an entire deep-fried apple fritter (and you'll want to; this one is delicious) you won't want to move, much less get up and ride a bicycle in the direction of more fried food.

A little more than six miles south of John's, this is the longest leg of the tour. After a journey down Gravois, you'll be happy to spot the little green shop. John's set the bar high with its fritter. Could St. Louis Hills compete? The trays of fresh glazed and long john doughnuts in the counter display called our name, but something else caught our eye.

"Is that filled with...cheese?" Gut Check asked excitedly. It was.

The cheese flip, a soft dough filled with rich cheese and topped with a crumb coating, turned out to be the right choice. The crumbs proved a bit messy, but the signature dessert was a win -- until Gut Check realized we were two stops into the Tour D'Onut and hadn't eaten a traditional doughnut. D'oh! "Next time," Gut Check promised ourself. Filled with cheese, feet dragging, we set out for our next destination.

Picking baked goods that weren't technically doughnuts at the first two stops turned out to be a good idea: From here on out, the doughnut shops only serve the basics: custard- or jelly-filled, sprinkled, long johns and glazed doughnuts. Donut Drive-In, a large white bakery on Chippewa, recommended a chocolate long john, a customer favorite, to Gut Check. The only other question: with sprinkles or without? Sprinkles, of course. The long john surprised us. Instead of a sweet, milk chocolate flavor, the doughnut tasted dark and rich. 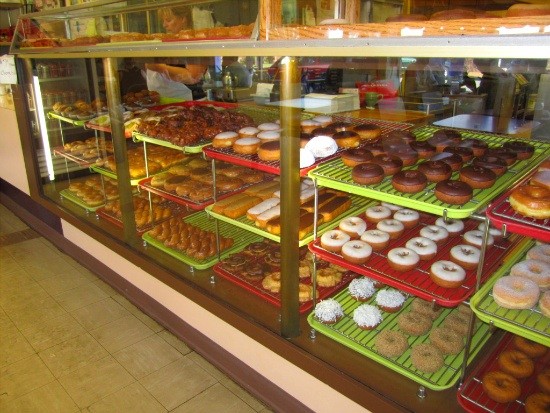 Our next stop, the Hill's O'Fashion Donuts, seemed promising. Walking up to the front door, we noticed large pictures of Elvis in the store's windows. But the inside didn't match the quirkiness of the King in the window, and the doughnut selection was bare. (Gut Check suggests stopping by earlier in the morning.) No matter, we decided that a shop with a name like O'Fashion might be a good place to pick up an old-fashioned glazed treat. The doughnut is far better than what you'll get from a chain doughnut joint. Lightly glazed, the baked good wasn't heavy, perfect when you're biking in hot summer weather.

Gut Check likes to go out with a bang. The final destination of the Tour D'Onut will drop you off near the botanical gardens at World's Fair Donuts. We decided to go a little crazy and pick out two treats from the counter display: a chocolate-covered custard doughnut and a vanilla-iced sprinkle doughnut. The custard doughnut wasn't the globby mess we expected. It had just a bit of sweet custard hiding in the middle. The sprinkled doughnut was a tad on the crispy side, which made it a lighter pastry.

The best part? All of that cycling and sweating helped us justify the calorie intake. We don't regret a thing.