[UPDATED] Cramps? Bloating? Unbridled and Irrational Anger Towards the Men in Your Life? Try Some Milk! 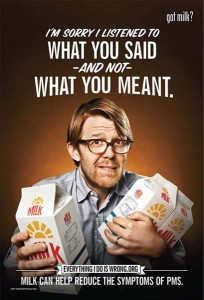 Is the normal, healthy functioning of your woman's body inconveniencing you?

Probably not. Most of the men I know are able to take such minor issues as PMS in stride. Some of them have been able to cope with a partner who has medical "female troubles" that surpass PMS.

Oh my God! Can you imagine? Something worse than PMS, that might make your gal not just crampy, but leave her in excruciating pain (endometreosis). Not just irritable, but suffering with depression and anxiety (premenstrual dyphoric disorder). Not just a little bloody for a few days, but shackled with bleeding that goes for weeks or doesn't happen at all (polycystic ovarian syndrome). Not just lethargic, but dead (uterine, cervical and ovarian cancers).

You see, most of the men I know aren't nearly as shallow and ignorant as the ones portrayed in the "Everything I Do is Wrong" milk campaign. They understand that irritability is just as likely to be caused by a stressful work day, difficult kids, the state of the world or perhaps coping with the dickheaded assumptions perpetrated by an advertising agency that still resorts to outdated and trite stereotypes about gender and how they relate to each other.

Likewise, most women don't embark on a reign of terror once a month. But you know that.

Pathologizing PMS doesn't do anyone any favors. It makes everyone look stupid because most women have figured out how to manage their symptoms, and most men aren't terrified of them. Because, you know, we're adults, and we don't live in the times of the menstrual hut.

But the pathologizing also distracts from much more serious medical conditions that far too many people are still willing to write off as PMS because it's oh so very terrible and horrible. If there's still exaggeration and stigma attached to run-of-the-mill PMS, it makes it that much harder for people to recognize when something far more serious might be happening. And that much harder to come forward and say there's something wrong.

Because if the person you love can't handle a little PMS, how is he going to handle something worse? Not with a few gallons of milk, that's for sure.

UPDATE: This morning the New York Times reported that the California Milk Processor Board has pulled the ads and switched everythingidoiswrong.com to gotdiscussion.com, a place to talk about our feelings regarding the ad campaign.

The revamped "Got Discussion?" website reads, "regrettably, some people found our campaign about milk and PMS to be outrageous and misguided." Others "thought it funny and educational."

"And we apologize to those we offended."

Although we're not familiar with website pre-approved apologies, we're pretty sure, "Sorry you're offended" isn't one of them.