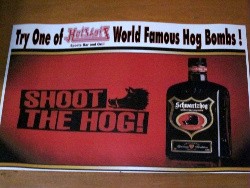 You've probably heard the term "McJob," or, even more likely, "GenX," both of which were coined by Douglas Coupland in his 1991 novel Generation X: Tales for an Accelerated Culture. We're going to borrow a couple more:

Nutritional Slumming: Food whose enjoyment stems not from flavor but from a complex mixture of class connotations, nostalgia signals and packaging semiotics: "Katie and I bought this tub of Multi-Whip instead of real whip cream because we thought petroleum distillate whip topping seemed like the sort of food that air force wives stationed in Pensacola back in the early sixties would feed their husbands to celebrate a career promotion."

Recreational Slumming: The practice of participating in recreational activities of a class one perceives as lower than one's own: "Karen! Donald! Let's go bowling tonight! And don't worry about shoes...apparently you can rent them."

They are included here because spending the afternoon drinking at HotShots Sports Bar & Grill (4021 Union Road, South County; 314-416-8516) and then blogging about it could come off as a variant on the above-described behavior.

Here are some facts about Drink of the Week that are working against us in this regard: we have never been to a HotShots before, we have never had a Jägerbomb (more on that later), we do not follow sports, and, though we call South City home, we rarely dip below the city line.

Some facts about the South County location of HotShots: It is located in a strip mall, it hosts regular sexy bikini contests, and its parent company sponsors the Woody and Rizzuto morning show. You can smoke, play keno or darts and watch a handful of different sporting events on its many TVs -- simultaneously, if you so desire.

So there it is. We don't want to be one of those snarky, judgy, mean-spirited people who take cheap swipes at easy targets. We don't want to take potshots at HotShots. But it would be as disingenuous as some politician's my-father-was-a-millworker, Joe the Plumber, man-of-the-people act to pretend that this is our kind of joint.

We are celebrating a birthday, and as such, it is the prerogative of the birthday boy (or girl) to pick the place and the duty of everyone else to keep their mouths shut about it. We order what the menu calls, "Loaded 'HotShots' Style Skins", which is comprised of your choice of fries or tater tots covered in cheese sauce, sour cream, bacon and chives (upon request). We go with the tots on the advice of our server, a pretty, perky brunette with caramel skin in a black tank top and hot pants.

The outfit affords a stunning view of her breasts -- round and full, resting atop her equally round and full baby bump. When asked about the sign advertising, "HotShots' World-Famous Hog Bomb," she explains that it is like a Jägerbomb, but with Monster Energy Drink instead of Red Bull and "fake Jägermeister." "It's called..." she trails off, searching. "Shhhh...shhhh...." "Schmagerschmeister?" we guess. "No..."

Turns out the stuff is called Schwartzhog. Like Jager it is a Kräuterlikör, meaning it is flavored with herbs and spices and sweetened with sugar. Both are 70 proof. The packaging and marketing of the two products are similar, though Schwartzhog sells for a few dollars less. We order a round, and our server returns with thirteen Solo cups perched on a bar tray.

The smell is cherry-ish, definitely owing to the energy drink, but the taste is burnt sugar and cola. Never having had a Jagerbomb, we don't have a point of reference, but our companions helpfully offer tasting notes. One tries to pin down that peculiar energy drink flavor, "like SweeTarts." Another suggests that Jägermeister is "less sweet and more anise-y." "Tastes like college," one girl deadpans.

In trendier places, a shot called a "Hog Bomb" would have a crumbled-bacon rim or be made with bacon-infused something or another, but HotShots is having no such cleverness. It's a Jägerbomb made with Schwartzhog, thus, Hog Bomb. Ultimately, this is the best thing to recommend about the place. Everything is totally on the surface, nothing about it is tongue-in-cheek.

In the twenty years since Coupland's novel was published, irony has had a hard go. After a near-fatal blow from Alanis Morissette in 1996, irony just stumbled around, getting fatter and more bitter with each passing year. If it is true that we now live in post-ironic times, then HotShots South County is where irony went to die.