Welcome to Girl Walks Into a Bar, a weekly Gut Check feature that spotlights local bars and bartenders. This week, Mabel Suen profiles The Heavy Anchor's Jodie Whitworth and Joshua Timbrook. Below is a Q&A with the pair, followed by the recipe for their concoction, the Rusty Anchor. 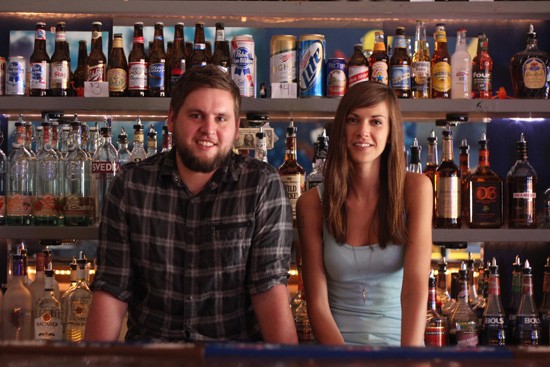 Last May, Jodie Whitworth and Joshua Timbrook teamed up to open The Heavy Anchor (5226 Gravois Road; 314-352-5226), a new community-based, eclectic indie/punk dive bar in south city with a dark-humored nautical theme and an ever-growing selection of drinks.

Colorful murals of octopi, narwhals and the like adorn dark blue and gray walls in the spacious, high-ceilinged bar area, and a door opens up into another room that features lots of regular live entertainment. There's never a cover to get into the bar; Instead, patrons have the option of whether or not to visit the other side - something that is rather unique in their set-up.

Both Whitworth and Timbrook have educational backgrounds dealing with varying aspects of music and met while working for downtown's Jupiter Studios. With their mutual love for music in mind, the young couple set off to create their own space to house shows multiple times a week, weekly double-feature movie nights and an all-around comfortable watering hole for like-minded laid back drinking enthusiasts.

"It's just us here. We do everything," says Timbrook, who along with Whitworth is an owner, partner and bartender. With a solid business plan in place, they opened their doors, albeit with limited bartending knowledge. Whitworth explains that it's been a lot of on-the-job-learning.

"We're not quite as rigid as most bars. We experiment with a lot of things and try them out on ourselves and our customers to see what people like," she says. "We're growing every week."

Food comes from local vendors like Gus' Pretzels, Billy Goat Chips, Dogtown Pizza and South St. Louis Pizza. Drink selections range from a large selection of liquors and canned beers to Franzia boxed wine and concoctions of their own, including a cherry chocolate shot.

Cocktails come in pleasingly frosty mason jars, like the Rusty Anchor, their version of an old-fashioned that they whipped up for us and named on the spot. It's mildly sweet, delightfully fruity, refreshing and quite possibly the perfect summer drink to beat the brutal heat.

Your bar is the only bar in St. Louis where... There's a mural of a narwhal as well as a mannequin wearing a Mexican wrestling mask and a Bosnian rosary. We've also been told that we're one of the few bars in town that actually uses ginger ale.

Girl walks into a bar and orders a ______ . She has just earned my undying admiration. The corpse reviver. We had an absinthe night the other night just because we were bored.

The most bizarre drink anyone's ever asked for. An old lady came in and ordered a sex on a beach. That's not that bizarre, but for this place it is. A kid also came in off of the street and just ordered a shot of butterscotch schnapps, drank it and left.

Other than your own bar, where do you go to get a good drink, and what do you have? The Jade Room because it's a 3 o'clock bar. Before we opened this place, we'd go to CBGB, the Bleeding Deacon and the Silver Ballroom. Josh's favorite drink is an old-fashioned. Jodie's is a jack and diet.

Who would you most like to have a drink with? JT: F Scott Fitzgerald. JW: Jack White.

If my friends and I simply must have a round of shots, what should they be? Cherry-chocolate shots, dreamsicle shots or Cabin Fever maple whiskey straight.

Best/worst/most exciting thing you've witnessed at your bar? We had to kick our first group of kids out. They were just throwing glasses on the ground and doing surprise trust falls. As far as the best, a girl had her space-themed birthday party here and came in on roller skates and a green alien-looking costume. She just brought in her laptop and played dance music all night with her friends.

Add 3 to 4 drops of Angostura Bitters

Garnish with a cherry on top