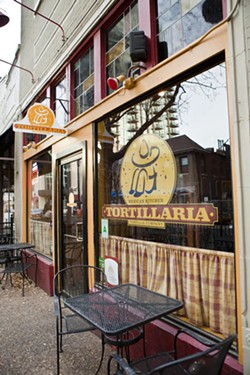 The perpetrator(s) hit Brasserie first, breaking open the back door around 4 a.m. Sunday.

"Someone...broke open the door and came in and opened the cash register and took off very quickly," says owner Gerard Craft.

Besides stealing money, the perpetrator(s) also smashed the restaurant's POS (point-of-sale) computer. "That's the worst of it," adds Craft.

Police took fingerprints from the scene but have yet to arrest a suspect. The official St. Louis Metropolitan Police Department filed this incident report:

On Tuesday morning, it was Tortillaria's turn.

At about 4:30 a.m., according to owner Adam Tilford, the perpetrators "went through the alley and kicked in the back door."

Tortillaria shares this back door with Racanelli's New York Pizzeria (12 South Euclid Avenue; 314-367-7866). From this back entrance, the perpetrator(s) then kicked in the door that leads into Tortillaria's kitchen. "They went right to the cash drawer," says Tilford. "In and out pretty quick."

"The cops said most likely it was cased. They knew exactly what to do."

There have been no arrests in this case, either. The police department's incident report has yet to be completed. More as we learn it.