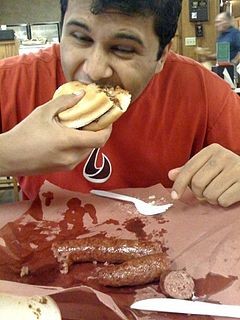 Obsessed with food? Can't resist the fried chicken? You might have some brain troubles.

Last week the Smithsonian's blog explored Gourmand Syndrome, prompted by an article in Outside about snowboarder Kevin Pearce. An Olympic-caliber snowboarder, Pearce suffered severe brain damage at the end of 2009 when he slammed his head into a half-pipe.

The traumatic brain injury nearly killed him. Among the damage to Pearce's cognition, short-term memory and vision, the accident has caused Pearce to change his tastes.

In his profile of Pearce, journalist Johan Lehrer writes, "He's also developed new food cravings: since the accident, he's become obsessed with basil pesto, and he insisted that I help him and Pia [Pearce's mother] make a big batch. 'I really didn't like pesto that much before, but now I put it on everything,' he said. 'It's crazy how tasty it is.'"

When a certain part of the right hemisphere of the brain is damaged by trauma, stroke or tumors, some patients develop "gourmand syndrome." First identified by neuroscientists in the 1990s, the disorder is marked by "a preoccupation with food and a preference for fine eating."

At this point you may be thinking what I'm thinking: I don't remember hitting my head. Joking aside, the syndrome goes beyond the normal (or at least semi-normal) infatuation of people like those of us who write and read about food--although, in at least one case documented by Swiss researchers, the syndrome prompted a political reporter to switch to food writing.

It's a part of our evolution to eat fat. A study released earlier this month from the University of California, Irvine, and the Italian Institute of Technology in Genoa showed that rats release endocannabinoids while eating fatty foods, which gets them high and makes them want more.

"The most surprising thing to most people, including me," said an author of the study, Daniele Piomelli, director of drug discovery and development at U.C. Irvine, "is the findings provide a window on how we relate to fatty foods."

Since fats are essential for cell functioning, Dr. Piomelli continued, "we have this evolutionary drive to recognize fat, and when we have access to it, to consume as much as we possibly can."

The same day the Times published their piece, the Daily Mail in the UK took a look at the addictive nature of salt.

This time American and Australian researchers subjected some mice to low-salt diets and gave others a salt drip. The results? Mice turned into little salt junkies.

Professor Derek Denton, of the University of Melbourne, said: 'In this study we have demonstrated that one classic instinct, the hunger for salt, is providing neural organization that subserves addiction to opiates and cocaine.'

The study also revealed that after salt was taken, the brain believes it has received its fix well before it should be physically possible.

In other words, the changes caused by salt cravings disappeared well before the salt could have left the gut, entered the blood and got to the brain.

Professor Denton said: 'It was amazing to see that the genes that were set "off" by the loss of sodium were already beginning to get back to the original state within ten minutes.

'It is an evolutionary mechanism of high survival value because when an animal is depleted of water or salt it can drink what it needs in five to ten minutes and get out which makes it less susceptible to predators.'

The researchers said that the importance of salt to overall health means that cravings for it form 'an ancient instinct' deeply embedded in the brain. This may explain why we find salty foods so tasty.