Harry Potter and the Deathly Hallows: Part 2 and Butterbeer at Home 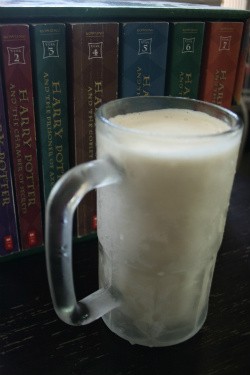 There's something wonderful about waiting in line in a swarm of like-minded fans for the release of a film you're ecstatic about. Waiting in a crowd of hundreds of excited Muggles dressed in their Hogwarts' finest, however, is downright magical.

And perhaps the theater was as enchanted as it seemed. Reviewing early box office reports for Harry Potter and the Deathly Hallows: Part 2, it looks as though someone cast an engorgement charm. The film grossed $126 million worldwide before the actual "weekend" portion of opening weekend began. And that's done properly -- without magic.

Judging by the sobs, cheers and wild applause (not all at once, of course) that punctuated the film, Gut Check wasn't alone in our thinking that Part 2 was well worth our two hours, $10 and four hours of sleep.

Aside from gracefully completing the series, the finale was a consummate companion to Part 1. Whereas the first Deathly Hallows was a slow-moving flick, riddled with anxiety and vague uncertainty while the young wizards are on the run, there was no hesitation in Part 2. Harry, Ron and Hermione knew exactly what needed to be done (well, they know generally what they need to do: find horcruxes, avoid being murdered, etc.) and they simply did it, without pause for fear, questioning or goodbyes. In retrospect, Gut Check envies those who opted for the Parts 1 and 2 double feature.

Although presumably most of the fans had already read the book and knew how J.K. Rowling ended the series, it was still wonderful to see Snape on screen in all his pasty, greasy glory, acting oddly human. Director David Yates communicated Voldemort's weakening visually, making him appear increasingly doughy and frail as more horcruxes were destroyed. Meanwhile Harry, who still looked quite young for much of the film, appears to age before our eyes as he gets closer to Voldemort, who, in case you didn't know, is super fucking evil. Baby-killing, kitten-eating evil.

Thankfully, Yates opted not to go out of his way to tug at heartstrings. He didn't include a montage of little baby Harry being precious. He also didn't linger on the deaths of major characters, and these understatements oozed melancholy more genuine than even a prolonged scene of Molly Weasley mourning. 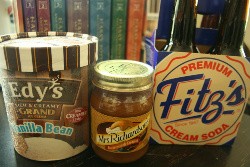 Our only complaint about the experience, really, was that Ronnie's (5320 South Lindbergh Boulevard, South Lindbergh; 314-843-4336) didn't stock the place with Potter-inspired treats. You know chocolate frogs, butterbeer and Bertie Bott's Every Flavor Beans would've flown off the shelves and made them an even prettier concession penny than the overpriced popcorn.

Therefore, we opted to make our own butterbeer. Although there's no official definition of or recipe for this fictional, sugary comfort beverage, there are dozens of recipes that all generally call for the same ingredients, give or take one or two. We opted to go with the Food Network's simple recipe.

Now we see why these kids were so pumped about Hogsmeade trips. This stuff is tasty! Yes, it's essentially a cream soda float with some extra sugary, buttery goop mixed in for flavor, but when slowly sipping it out of a frosted mug in front of an air conditioner on a hot summer day, butterbeer hits the spot. Of course, if you're not on the run, dodging Death Eaters, it's not advisable to drink butterbeer as frequently as the Hogwarts students did -- unless you have magical metabolism.