News broke this week that Normal, Illinois-founded Steak 'n Shake plans to open its first New York City location. The when is unknown, but the where is significant: right next-door to the Ed Sullivan Theater, where Late Show with David Letterman is filmed. Now, this suggests a grab at the tourist trade, and at a conservative estimate New Yorkers have one million other places that serve burgers, but Steak 'n Shake has something that none of those other places do, something very close to our hearts here at Gut Check International Headquarters.

No, it's not the paper hats. 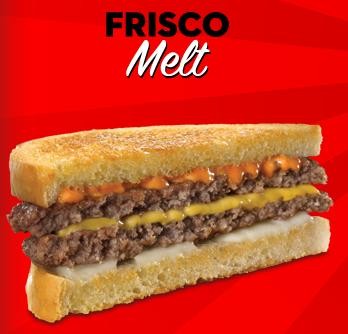 What Steak 'n Shake has is the Frisco Melt: two steakburgers, American and Swiss cheeses and the signature "sweet 'n tangy Frisco sauce" on buttered and then grilled sourdough bread.

You might love this burger. (I do.) You might hate this burger. That's beside the point. Because the Frisco Melt, by virtue of some kind of alchemy of butter, beef, grease and "Frisco sauce" is the greatest hangover cure indigenous to the United States, an alcohol mop of the first class.

I think the sauce is the key. It's like the human-detoxing equivalent of those enzymatic cleaners you use to clean up cat piss.

New Yorkers: Never again will you fear that extra stop on the bar crawl, that extra round of shots. Just take two Frisco Melts and thank me in the morning.