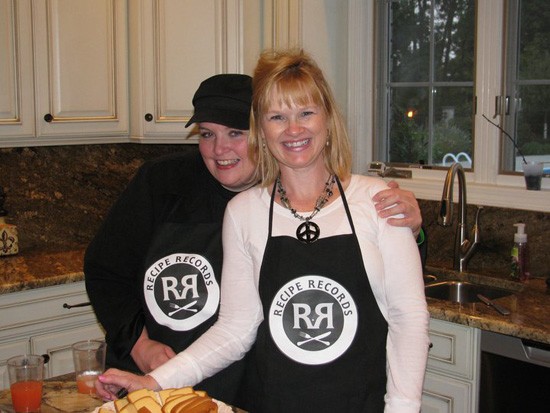 Music and food make a wonderful pair, and so do Maggie McHugh and Lanea Stagg, co-authors of Recipe Records, a locally released rock & roll themed cookbook featuring easy and tasty recipes inspired by some of the writers' favorite songs and home-cooked recipes. Gut Check met with McHugh to discuss their book, which was released in August 2010. Look after the jump for the authors' recipe for "Once Bitten Twice Baked Potatoes."

Mabel Suen: What inspired you to write Recipe Records?

Maggie McHugh: Lanea and I are best friends, and we bonded over music. We became friends through going to concerts, and then we started sharing recipes together. We always joked about finding something to do to quit our day jobs that combined our favorite two things. One day we were sitting around listening to "Yellow Submarine" by the Beatles and joked that a yellow submarine sandwich would be a fun idea. I thought of many more song titles that related to food and had the idea of making a song-and-food cookbook. The ideas started coming forward, and we thought we might have to go ahead and make it into a real thing. It took us a couple of years, but we finally got it together.

How did you and Lanea meet? Do either of you reside in St. Louis currently? I grew up in south Illinois, about an hour away from St. Louis, and always considered it my home. Lanea grew up in Marshall, Missouri, and felt the same way about St. Louis. We met in my hometown of Mount Vernon, Illinois, when we were both living there. I have been living in St. Louis for fifteen years.

How would you describe Recipe Records?

It's a rock & roll themed cookbook that has fun titles like "Blue Suede Stew," "The Rolling Scones" and "Girls Just Wanna Have Rum." The recipes are easy and very delicious. We include stories about rock & roll experiences. We have trivia, facts, fun little tidbits and suggested song lists in lieu of a suggested wine list for preparing the food and dining.

What is your favorite type of food to cook? Favorite record? We both love dessert because that's the most delicious part of the meal. I personally like appetizers. Lanea is an excellent cook and makes everything good. As far as records, our number-one band is the Beatles. We love everything from Chuck Berry to the Foo Fighters, and we're always trying to discover new music to appreciate.

Who in your life has been most influential in terms of cooking? Do you have a personal culinary hero?

Both of us would say our mothers, but I personally am a big fan of the Food Network and several different chefs and cooks on there.

How is the book organized?

We gave all of our chapters a rock & roll themed title. We start with the appetizers and then it goes into the entrees. The entrees are called "The Main Event," the appetizers are "The Opening Act," cocktails are "The Mosh Pit," desserts are "The After Party" and breads are "The Roadies."

Where did the recipes in your book come from?

Mostly from Mom. We have become recipe collectors -- especially Lanea. We were in a group of girls that would get together once a month as an excuse to hang out together. We'd make different cocktails and appetizers and desserts, and we got a lot of our friends' recipes. We created a lot of them too. We took a trip to Nashville and came home with a "Helter Skelter Skillet." Lanea currently lives in Evansville, Indiana. Because of the distance between us, we did a lot of the writing of the book by telephone and e-mail. We'd write recipes together or take old ideas and put special spins on it.

What recipes from the book are your favorites?

"Buffalo Springfield Dip" is my favorite, and probably "Little Piggies In a Blanket with Mean Mr. Mustard Sauce."

What is your philosophy in the kitchen?

I think the best way to enjoy yourself in the kitchen is to have the music playing to make it more enjoyable and more fun. Rock out in the kitchen!

What ingredients do you keep on hand at home to make meal preparation easy?

Anything that's easy to grab that won't go bad quickly. A lot of our recipes are quite simple, and most of them are pantry and freezer ready. We like to keep a lot of canned things like canned tomatoes for sauces or side dishes. I also always have canned fruits, frozen vegetables and anything that you can keep on hand for a little while. Lanea's the mom of three kids, so she needs a pantry full of stuff.

What is your favorite kitchen tool? Favorite spice?

My favorite spice is pepper because it certainly makes everything better in dishes. For Lanea, I would say salt because salt brings out the flavor in just about everything. They're both very simple spices that everyone has on hand. I love my crock pot. You can do just about anything in a crock pot.

What do you hope people take away from Recipe Records?

The number-one goal is to enjoy the combination of music and food. We want to share our love of music to anyone we can. Music and food are our greatest passions other than our families. We hope people will enjoy the stories as well as the recipes. Have fun with it. It's our whole intention.

How can people learn more about Recipe Records? Where can they find it? It's available at Vintage Vinyl on Delmar, Phoenix Rising on Delmar and Left Bank Books on Euclid in the Central West End. It can also be purchased on our Web site. You can also check out Recipe Records on Facebook.

What's down the road for you and Lanea?

We are currently working on marketing this book, but we are also in the process of writing our next book: Recipe Records: '60s Edition, inspired by music of the '60s and comfort foods -- stuff that Grandma made.

Preheat oven to 350 degrees. Cut six pieces of aluminum foil, large enough to completely cover potatoes. Put potato on foil and rub 1 tablespoon of butter onto potato; sprinkle with sea salt. Wrap in foil. Repeat for rest of potatoes and bake for about 1 hour, or until potato feels softened when squeezed with a potholder. Remove potatoes from oven and let cool completely. Once potatoes are cooled, slice in half lengthwise and scoop potato out of skin. Put into large mixing bowl and mix with rest of ingredients, using electric mixer. Spoon mixture equally into the potato skins, top with a little shredded cheese and then a little pepper or paprika. Put potatoes on baking sheet and broil for about 10 minutes, watching closely not to burn.

For more tasty tidbits and opportunities to win great prizes, such as cookbooks, gift certificates to local restaurants and more, subscribe to Tip of the Tongue, the Riverfront Times' weekly food newsletter. This week, we'll raffle off two copies of Recipe Records.

Books In the Kitchen