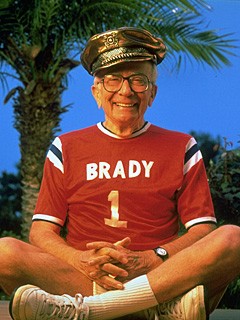 Sherwood Schwartz passed away on Tuesday. He was 94. Schwartz started writing for television in the early days, including The Red Skelton Hour from 1954-1962. Two years later he created Gilligan's Island, followed in 1969 by The Brady Bunch.

Sam Denoff died last Friday at the age of 83. He was a writer for The Dick Van Dyke Show. When the show ended in 1966, he created That Girl.

To honor Schwartz and Denoff, Gut Check is doing the only thing we know how in our grief -- we're watching food scenes from these comedy masters.

In this sketch from The Red Skelton Hour, Skelton portrays a brilliantly sloppy drunk who hasn't had a single drink.

Television writer Rob Petrie (Dick Van Dyke) illustrates that, like all men in the early '60s, he has no grasp on how toasters work or where the grocery money goes.

Who knew a tropical deserted island would be a great place to make pies? The girls on Gilligan's Island whipped up quite a few. Which, in classic Schwartz style, often landed in someone's face. For That Girl, Sam Denoff put Ann Marie (Marlo Thomas) in every place a hip single girl in the late '60s wanted to be. In this case, jumping out of an airplane for a soda commercial.

The Bradys had the best kitchen in television history, and with Alice the housekeeper keeping company with Sam the butcher, you know some good meat was coming out of that built-in oven.

If there's any justice, Sherwood Schwartz will have a steady supply of pork chops and applesauce in the hereafter. Served with a bad Bogart impression.