Oh thank heaven! Free Slurpee Day lands on what might be the hottest day of 2011!

Except on July 11, when 7-11 gives away free Slurpees to celebrate its birthday and get people into its perpetually beige, dingy stores.

When we arrived, a steady stream of customers was leaving the store, tiny Slurpees in hand. The freebies come in 7.11-ounce cups that can be obtained from the cashier. Otherwise, all hell would break loose. 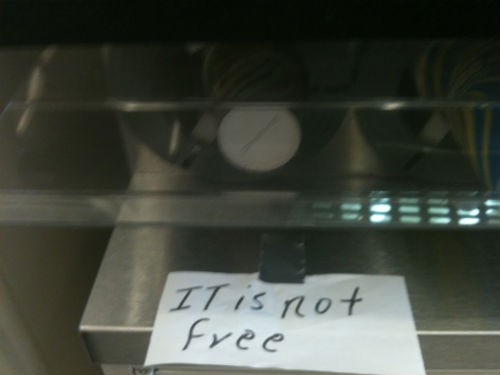 We crouched under the crowd to snap a photo of the sign as a rightfully cranky employee passed and said, "Here. Take a picture of this one while you're at it," as he smacked a sign under the larger cups. 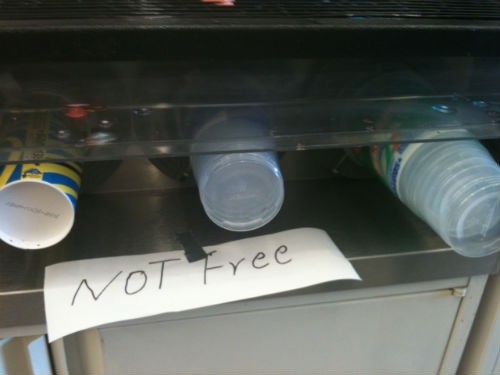 "We have to put the signs up. Otherwise everyone tries to get the biggest ones for free," he explained.

Or, since there's no information indicating that the free Slurpee cups must be obtained at the counter, perhaps some customers are just taking a wild guess on the official 7-11 free Slurpee size policy.

This might explain why 7-11 isn't fairing as well in the U.S. as they are in Scandinavia and Southeast Asia, where people understand portion control and commerce. In the U.S., when told that no, you will have to pay for your $1.39 big Slurpee, this is what happens:

Abandoned. Unwanted. If we can't get it for free, goddamnit, we don't want it. And what do you mean a Busch tallboy ain't a free Slurpee?

Also, what's happened with plain old fruit-flavored Slurpees? They're all Fanta-ized. Or Fanta-sized. Either way.

The Slurpee website describes the Alienade as "an out-of-this-world blend of strawberry, raspberry, and lemonade". We were concerned that it might taste like Harrison Ford sweat, which we might go for it if were 1984 Indiana Jones and the Temple of Doom sweat. But now? It might taste like Centrum Silver and Bengay, so we stuck with our original order, a Coke Slurpee.

7.11 ounces of Coke Slurpee is plenty. It's enough to get the flavor and one good punch-to-the-head rush of brain freeze. It's also enough to leave nearly a cup of high fructose-coated ice wallowing in the belly of the overheated consumer. That's enough to last until next year.