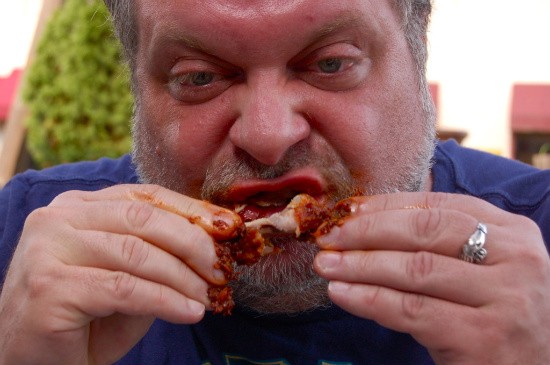 Disappointed with our pigeon's writer's defeat in the Pearl Cafe spice challenge, Gut Check decided it was time to turn up the heat: The same no-pay scribe should try the much-hotter ghost-pepper-wing challenge at Market Pub House (6655 Delmar Boulevard, University City; 314-727-8880).

Market Pub executive chef Shawn Isbel began the spicy wing challenge as a a gimmick to draw in college kids. To date 700 people have attempted the challenge. Only 26 have finished. The record holder is a man who tore through all ten wings in 50 seconds. Gut Check wasn't intimidated by those odds, though.

But hearing what goes in the sauce sure did freak us out.

Isbel uses five different peppers, including the legendary ghost pepper and pure capsaicin; the ghost pepper clocks in at nearly 1.5 million on the Scoville scale, while unadulterated capsaicin tops the entire scale at more than 15 million. The wings themselves are said to register about 5 million on the scale -- the same level as law enforcement-grade pepper spray. (Mace! Appetizing!) The wings are so hot that Isbel says almost everyone who tries the challenge gets sick. He won't eat them himself, though he has tasted the sauce at every stage of its preparation while refining the recipe.

With Market Pub owner John Racanelli, manager Robert Hazelwood and Isbel gathered around our patio table, Gut Check ordered up the poultry. While they were cooking, our two challengers signed waivers. The contest rules are simple: Eat ten ghost-pepper wings in ten minutes without the help of a beverage. Should you finish, you must lick your fingers and sit at the table without drinking -- or hurling -- for another five minutes. There's no sharing, and you have to eat the wings on the patio because the smell irritates fellow diners.

If you win, your picture is featured on the restaurant wall, you get a T-shirt and you don't have to shell out the $12 price of the wings.

The chicken arrived at Gut Check's table along with two glasses of milk in the event our contestants failed to withstand the heat.

Our hapless writer took precisely two bites, yelped in pain and threw in the towel.

Our other competitor, the ringer from Classifieds, fared considerably better, though he failed make it all the way to the finish line either. Madonna ingested seven out of ten wings in an impressive six minutes. Nose running, hands shaking and eyes watering, the look of defeat on his face was almost too much for Gut Check to bear.

"Stop crying," we soothed, crossing another challenge off our list.

And we had such high hopes for this one.